Getting Cairn To Accept Govt Norms To Be Tough 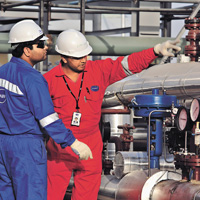 Emphasing that CIL was an independently run listed entity with an independent board that was duty bound to act in the interests of all shareholders, he said the riders "would involve a significant departure from the terms of the existing contracts entered into by CIL and government."

"We also understand that these (conditions) would have a material adverse impact on CIL's value and thus negatively impact the interests of all shareholders, including the minority shareholders. Acceptance of any of these proposals is likely to be challenged by CIL's minority shareholders under the provisions of the Companies Act. As such, you will kindly appreciate that we are not in a position to accept these," Vedanta Resources CEO M S Mehta wrote in the two-page letter.

Analysts said if Vedanta accepts the government preconditions, then it will have to overrule the board of Cairn India and make it do a U-turn into accepting them.

While an e-mail sent to Vedanta remained unanswered, Cairn India spokesperson was unavailable for comments.

Cairn Energy has always maintained that it is just a shareholder in CIL and the expertise, skills and management vests in Cairn India. So can the UK firm or its successor impose conditions which are detrimental to Cairn India's interest, an analyst asked.

Another analyst said minority shareholders can take the board of directors of Cairn India to court for jeopardising their interest by compromising on their interest.

The Cabinet Committee on Economic Affairs (CCEA) had last week decided to give approval to the USD 9-billion deal subject to Cairn/Vedanta allowing royalties from Cairn India's prize Rajasthan oil fields to be added to project costs and recovered from sales. Also, it has to end arbitration proceedings against the government disputing its liability to pay cess, or tax, on its 70 per cent share of oil from the fields.

Third, the deal has to be approved by state Oil and Natural Gas Corp (ONGC), which has a stake in all three of Cairn India's producing assets and five of its seven exploration assets, waiving its pre-emption rights. And finally, the acquisition needs security clearance.

Cairn Enegy is selling 40 per cent stake in Cairn India to Vedanta.

Sources said while Cairn India will not have to pay any royalty and state-owned ONGC will continue to pay royalty on its behalf to the state government but the levy will be added to project costs that is first deducted from oil sale revenues before profits are split between partners and the government.

Acceptance of this condition by Edinburgh-based Cairn Energy or its successor London-listed miner Vedanta will lower Cairn India's profit over the approved life of the life lasting 2020 from $7.43 billion to $5.75 billion.

Sources said the lower profits have been calculated at approved peak output of 175,000 barrels a day and considering a crude oil price of $70 per barrel.

Cairn also has to agree to ending arbitration proceedings against the government disputing its liability to pay cess, or tax, on its 70 per cent share of oil from the Rajasthan fields. Cairn India currently pays Rs 2,626.5 per tonne cess under protest but unlike royalty, treats it as a cost recoverable item.

The government take from the RJ-ON-90/1 block will come down to $3.6 billion from $5.188 billion as a result of royalty being made cost recoverable, sources said.

Also, the deal has to be approved by state Oil and Natural Gas Corp (ONGC), which has a stake in all three of Cairn India's producing assets and five of its seven exploration assets, waiving its pre-emption rights. And finally, the acquisition will need security clearance.

ONGC pays royalty on its 30 per cent share of oil from Rajasthan fields as well as on operator Cairn India's 70 per cent take. It will contractually continue to pay royalty on all the oil produced from Rajasthan but this will be added to project cost, which is first deducted from revenues earned from sale of oil before profits are split between partners.

Cairn last week cut the price it was demanding from Vedanta and removed a noncompete condition. Vedanta will now pay USD 6.02 billion for a 40 per cent stake in Cairn India at a reduced price of Rs 355 per share, down from the original USD 6.84 billion.

Last August, London-listed, India-focused miner Vedanta proposed to buy 51 to 60 per cent of oil and gas explorer Cairn India for up to $9.6 billion in cash, but the deal has been delayed due to a lack of government and regulatory approvals.

Even before Vedanta made its move, ONGC had demanded that royalties be added to costs and recouped through sales, citing provisions in its contract. After the deal was announced, it maintained it had pre-emption rights and that the acquisition could not go ahead without its agreement.

The CCEA last week overruled objections to ONGC's demand by Cairn/Vedanta and held these will have to be met before the approval is granted.

Both Cairn and Vedanta disputed royalty being made cost recoverable as it would dent Cairn India profits. They also opposed the need for partner consent for the transaction.

Vedanta has steadily built a position in Cairn Energy this year by acquiring a 10.4 per cent stake from Malaysia's Petroliam Nasional Berhad, or Petronas for $1.47 billion (Rs 331 a share). It also bought 8.1 per cent stake through Sesa Goa's open offer to shareholders, which closed on April 30, for $1.2 billion. The open offer was made at Rs 355 per share (original acquisition price of Rs 405 minus Rs 50 per share non-compete fee).
(PTI)