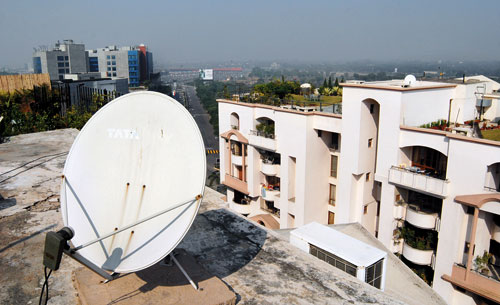 In Chennai, things are worse. The Tamil Nadu government-owned Arasu Cable TV Corporation, which has edged out Sun TV's Sumangali network to become a virtual monopoly, has not even begun ‘seeding' STBs, the crucial link for monitoring and de-encrypting digital signals.  Managing director D. Vivekananda says Arasu Cable is still at the tendering stage for 2.5 million STBs. According to industry sources, the state governmentwill be writing to the I&B ministry for an extension.

But broadcasters are opposed to any postponement. Says Uday Shankar, president of the Indian Broadcasters Foundation (IBF): "We will strongly oppose any parallel continuation of analog systems. It is a fount of corruption.

The cable operators had plenty of time." Shankar, who is also the CEO of Star TV, points out that the analog blackout is applicable to head-end operators and not individual subscribers. The latter have the choice of  migrating to other distributors.

The delay is not just due to the shortage of STBs. Distribution of digital signals require sophisticated equipment and imported control rooms that are not available off the shelf.

Fearing redundancy, several franchises like Gaur Networks in south Delhi and Chawla Cable in Connaught Place have broken away from their MSO partner DEN Networks and are trying to set up their own control rooms. This, too, is delaying digital changeover. In Mumbai, two joint venture partners of MSO Hathway Cable — Rajesh Cable and Bhawani Networks — have moved the Bombay High Court seeking a stay on the blackout of analog networks on 1 July on the plea that their technical equipment is not yet in place. Notice to the I&B ministry has been issued, and the case has been posted for hearing on 11 June.

It is not the shortage of STBs but the failure of the government to set up a viable business model that is causing delay insisits Mansukhani. The upgrade of 6,000 distribution centres in the country at Rs 3 crore apiece involves an investment of Rs 18,000 crore while a subsidy of around Rs 1,200 per STB for 90 million homes means sinking in another Rs 11,000 crore. Exemplifying the situation, the Hinduja-owned InCable Network has imported lakhs of STBs; but these are lying in warehouses awaiting delivery as the MSO has not paid up.

Tariff Issues
When the DAS rollout for cable TV was notified last October, all stakeholders, including broadcasters, the cable and DTH companies and even the small cable operators, supported the move. The changeover was to be staggered over 4 phases, starting with the 4 metros on 1 July 2012 and ending with rural India by the close of 2014.

This was unlike the previous unsuccessful attempts over the last decade. In 2002, the Cable Regulation Act was amended to introduce Conditional Access System (CAS) by September 2003 for the 4 big metros. It only happened in Chennai, and in a few affluent pockets of other cities. In December 2007, TRAI again finalised a 55-city rollout of CAS; but big broadcasters like Star and the government, fearing the wrath of the cable unions, backed off. But why is there confusion again?

The Telecom Regulatory Authority (Trai), which doubles up as a broadcast regulator, announced the tariff structures for the four metros on 28 April (see DAS In A Nutshell). In pricing of channels, Trai has left much to market forces with broadcasters being asked to fix their rates by 30 May. Media Pro, the distribution alliance of Star and Zee channels, is offering its 78-channel bouquet at Rs 700 per month to MSOs; others have not yet announced their rates. The sharing formula, however, has been fixed, with MSOs paying 42 per cent of the subscriber fee to the broadcaster, 35 per cent to the local operator, and keeping the rest. To compensate the MSOs, Trai has legalised ‘carriage fees' as an additional revenue stream; it has banned ‘placement' fees though.

break-page-break
But there has been a howl of protest from cable MSOs. They point out that in the new regime, carriage fees will disappear with the availability of 500 channels of comparable quality. They also point out that the tariff rules allowing broadcasters 42 per cent share of the subscriber revenue favour direct-to-home (DTH) platforms. The norm for DTH platforms is a 15 per cent share in 2-year contracts. Besides, there are no local cable operators (LCO) extracting their pound of flesh (35 per cent) in the case of DTH.

"The business model devised by government does not support the cost of investment, nor will it allow us to stay in business," says Mansukhani, speaking on behalf of Hindujas' InCable. "The government should have fixed an MRP for each channel. Now you will have channels priced at different levels based on negotiation in the same city," he adds.

The cable industry will also find ammunition in a recent report of the Lok Sabha Standing Committee on IT that has pulled up the I&B ministry for not having assessed the availability of STBs before fixing dates for a digital changeover. The panel favours indigenous production of STBs and advocates hiking customs duty to 10 per cent from the current 5 per cent to encourage local production.

But if we have to wait for 100 per cent indigenisation of STBs, as suggested by our parliamentarians, waiting to go digital would be like waiting for Godot.

Lack Of Funds
The snail's pace of conversion to digital systems by cable networks can be traced to shortage of funds and their inability to raise debt or equity expeditiously. The big MSOs have so far committed an estimated Rs 1,000 crore in equipment and STBs for the digital upgrade. However, with the requirement touching Rs 30,000 crore over the next 2-3 years, the industry's survival is dependant on whether it is able to attract the investment required.

As a policy incentive, finance minister Pranab Mukherjee had indicated in his budget proposals last year that the FDI limit for cable TV companies converting to digital systems would be hiked from 49 to 74 per cent. However, the government has been dragging its feet on the foreign direct investment (FDI) front.

But lack of funds is an old story. The two-decade old cable TV industry has come to be known for its whining attitude. Failing to modernise and upgrade quality, it has lost out to its younger  DTH cousins who have been less than 8 years in the business. DTH platforms like Dish TV and Tata Sky are selling packages aggressively, taking a hit of Rs 2,000-3,500 per subscriber, while cable TV networks keep whining about selling STBs at a subsidy of Rs 1,000. Collectively, DTH companies have drummed up consolidated losses of over Rs 25,000 crore, but are still going about their business of adding subscribers. It is this approach that is bringing in a million subscribers a month to DTH, which now boasts of 35 million subscribers, or 30 per cent of the cable and satellite market.

The current advertising drive of Tata Sky and others targeting cable TV subscribers is in the same mould. Since he has to buy an STB, these ads tell him to switch from cable to ‘hassle-free' DTH packages. An internal document circulating in the cable TV industry recognises the danger of losing subscribers during the changeover. "Now with the DAS mandate they (subscribers) are forced to go for a digital box and hence would not mind trying out what is perceived as a superior product. There will be a 15 to 20 per cent churn from cable that will fall into their laps," the document admits.

Not all cable companies are myopic in their vision. The Rajan Raheja-promoted Hathway Cable has so far committed Rs 300 crore for upgrading its systems, and its CEO K. Jayaraman claims he is fully geared to meet the 30 June deadline. "In Mumbai and Delhi we have installed STBs in about 10 lakh homes, that is about 50 per cent of our subscriber base," Jayaraman told BW. "We aim to add another 20 per cent by 1 July, but 30 per cent may face a blackout and go for other options," he adds.

Jayaraman also believes that the ball is in the government's court and it should go ahead and "bite the bullet" as that is the only way to bring in digitisation. "If there is no blackout on 1 July of analog systems, consumers on the fence will never go out and buy a box."

But the odds are stacked against a blackout on 1 July and in favour of a postponement.  Takru is firm about the date, but the final call will be taken not by the bureaucrat but by his pragmatic minister.