Get Ready For A Ride On Chips 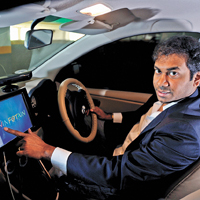 A few cars launched recently in India use electronic parts developed specifically for them. Tata Nano has low-cost instrument clusters developed locally by Freescale Semiconductor and other firms. Tata Aria has infotainment systems, climate control, anti brake-locking system and parking sensors developed by TCS and Tata Elxsi. Bajaj Auto is taking the first steps to introduce electronic engine control in its bikes, starting with Pulsor. A large number of auto electronics firms in India are developing parts for the rest of the world, not to speak of domestic and multinational auto firms importing an increasing number of electronic parts for cars in India.

The result of all these is an impending explosion of the auto electronics sector in India. According to Frost & Sullivan, the Indian auto electronics market was worth $3 billion last year, of which the indigenous industry contributed $1.2 billion. The market is growing at 40 per cent a year and is expected to touch $6.5 billion at the end of next year, with an indigenous share of $2.7 billion. "India is becoming the hub of small car manufacturing in the world," says Deepa Doraiswamy, industry manager for electronics and automation at Frost & Sullivan, South Asia and the Middle East. Earlier, this would have meant little for the domestic auto electronics industry. But it makes a big difference now.

Efficiency Is The Key
Over the past few years, the Indian government has been stepping up its efforts at auto emission control, forcing the industry to upgrade its technology. The Bharat IV emission norms, now being implemented in 13 cities, force a shift from mechanical engine control to electronic control. It is easy to assume that Indian car companies could import the engine control unit (ECU) and other electronic parts, but Indian conditions put additional demands on auto-makers. "Bharat IV norms require precise engine control," says K.P. Gandhi, executive director, technical, of the Society of Indian Automobile Manufacturers. "The lower quality of Indian fuel forces a different kind of development for Indian manufacturers." There are other factors, too, like the higher ground clearance of Indian vehicles.

This has meant a flurry of electronics development for Indian car makers, no matter how small the vehicle is. In fact, the trend is catching on even among the two-wheeler manufacturers. "Two wheelers will go through a big shift in technology when they are forced to confirm to emission norms," says Ganesh Gurumurthy, country manager of Freescale Semiconductor in India. As the norms percolate down to two-wheelers, they will be forced to shift from mechanical to electronic control. Two wheelers have little or no electronic parts now, except flashers and electronic injection. Over the next few years, the share of electronic content in two-wheelers is set to rise from 5 per cent to about 50 per cent.

Yet, it is not just the ECU that uses electronics in automobiles. Modern cars use a large number of electronic components for safety, navigation, entertainment, control of body parts and telematics. A large number of these parts are making their way to cars in India, and not just the luxury models. "A lot of embedded architecture is going in to sub-Rs 10-lakh cars, and this is the fastest- growing segment," says Adithya Bhat, managing director of Protiviti India, a consulting firm.

Here is an example. The Blue&Me technology is a recent invention of Fiat and Microsoft from India, and now being sold in many models globally. This infotainment system lets you control your cellphone and audio system using voice and easily make and accept phone calls while driving a car. One expects such a system to be used only in luxury cars, but it is available in Fiat Linea and Punto in India. When Fiat launched Punto in 2009, they were surprised at the large sales of the more expensive versions. Needless to say, they had the Blue&Me in them.

Expanding Base
Two years ago, German auto electronics company Bosch Chassis Systems announced the setting up of a facility in Pune to manufacture anti brake-locking system (ABS), with an initial investment of Rs 100 crore. Bosch was the first in the world to introduce ABS with electronic control. This was the first ABS manufacturing facility in India, and Bosch has a capacity to make 30,000 units a year. The investment on this facility has already crossed Rs 300 crore and Bosch could end up investing around Rs 3,000 crore over the next four years.

Till recently, few Indian cars were being sold with ABS. This has changed in recent times — around 30 per cent of vehicles now have them. Also, ABS is being perceived to be important for two-wheelers as well, and is being developed for Indian conditions rather than being imported. Says Ashok Chandak, senior director: global sales and marketing, NXP Semiconductors: "The Indian customer's perceptions about safety have changed considerably in the past two years." NXP makes chips for ABS and other auto electronic components.

As the auto sector picks up, and the share of electronics rises in automobiles, India is likely to see large investments in the sector. Continental Automotive is investing Rs 220 crore to manufacture engine management systems (EMS) in India. It now supplies EMS for the Toyota Etios from its manufacturing facility in Bangalore. Likewise, most of the major auto electronics firms have either set up or are setting up R&D bases in India. This includes systems manufacturers such as Delphi, Bosch and Continental Auto, semiconductor firms such as Freescale, NXP and Infineon, design software firms such as Cadence and Mentor Graphics, and IT companies such as Microsoft and Wind River Systems (which is now setting up R&D in India).

The domestic auto industry is now spurring development of an indigenous auto electronics industry as well, with high-tech firms flourishing in the most unlikely places. Pricol in Coimbatore and Varroc in Aurangabad are significant players in the domestic sector. Other examples include Minda Industries in Pune and Interface Microsystems in Gurgaon. Interface has closely worked with Mahindra & Mahindra to make engine controls and other electronics. "We have about 50 partners for every vehicle programme," says Rajan Wadhera, chief executive, auto and farm division at Mahindra & Mahindra.

Software firms are also enjoying the growth spurt of the auto electronics sector in India (sofware code in a car has grown from about 1.2 million lines in 2000 to over 80 million lines now). Domestic IT majors such as Infosys, Wipro and HCL have groups developing software for automobiles. Now, seeing the potential for domestic business, some of them are being proactive as well. KPIT Cummins created a team a year ago to ideate only about cars. It is now pitching to automobile firms on how these ideas can go into cars, one of which was to integrate hybrid technology to Indian cars. The firm has been granted four patents on its ideas. "It is easier to integrate entertainment systems into cars, but safety aspects take time due to the cost of manufacturing," says Anup Sable, vice-president of automotive business at KPIT Cummins.

The global auto electronics sector is going through a vigorous phase of growth, as automobile companies try hard to improve the efficiency, safety and comfort of their vehicles. Already cars are categorised according to their electronics content. "The cars of today can measure the number of times you blink," says Pavan Kumar, managing director, Altair India. The auto industry is making rapid progress towards completely automated cars. The Indian auto industry may take a while to get there, but it is on an exciting journey that can sustain a very large electronics industry for a long time.