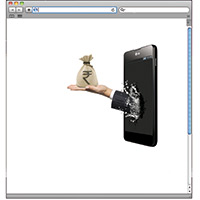 08 November, 2014
Print this article Font size -16+
Are you one of those whose posts get hundreds of likes?  Likes, favourites, shares and retweets are ego-boosters, no doubt. But wouldn’t it be nice if you could monetise your clever posts?

A couple of new social networks are sharing their wealth with users. There’s Bubblews, a social blogging site started by Missouri-born computational toxicologist Arvind Dixit (he has an Indian father and a Polish mother), which compensates users for creating content that attracts traffic and advertisers. According to Bubblews’s founder, rather than building a business that benefits only a few, the idea is to build a self-sustaining ecosystem that pays people for their time, energy and thoughts. Essentially, it shares ad revenues. Each user has a ‘bank’ button where points generated get logged. When you have collected a certain number of points, you can encash them by clicking the ‘redeem’ button.

Bonzo Me, created by New Jersey-based surgeon Michael Nusbaum, is yet another social networking platform that shares ad revenues with users who create content that goes viral. While Bonzo Me only released its apps — for Web, iPhone and Android devices — in early July this year, it claims to have already shared $30,000 in ad revenue with its users.

BRAND BUZZ
Twitter’s New Ad Play
After recording $277 million in ad revenues last quarter, Twitter has decided to change its ad pricing model. Discarding  its cost-per-engagement model, wherein advertisers paid for promoted feeds only when users clicked on them, it has introduced tools like app installs, follows and leads front.  Advertisers can now create campaigns with specific objectives in mind and pay only when those goals are met. This change will force campaign managers to think through their social media strategies to get more bang for their buck.

DIG THE DATA
Steady Stream
Eighty per cent of YouTube traffic is outside the US, but the video-sharing site still holds 20.5 per cent of US video advertisers. As many as 14 per cent of Americans use YouTube during work hours, says a study by JWT Inside and Social Recruiter Guide

Twitter Twist
According to social media tracker Online Social Media, Twitter now has over 271 million active monthly users, but shockingly, around 8.5 per cent or 23 million of them are not humans but bots. The new Twitter filing shows these accounts have no human input and about 5 per cent of these are actually spam accounts with the other 3.5 per cent being parody, industry or company accounts

LEADER
Narendra [email protected]
Prime Minister, India
“Our nations are so close yet such a visit took 17 years. This will change and we will strengthen India-Nepal ties ”

Elon Musk @elonmusk
CEO, Tesla Motors
“Hope we are not just the biological boot loader for digital super-intelligence. Unfortunately, that is increasingly probable”