Get A Local Sim 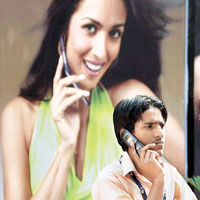 Click-Cart Effect
The number of online shoppers in India has grown 18 per cent last year, says analytics firm comScore. And the trend is just growing. For instance, 60 per cent of the 46 million unique users in November visited retail portals. Flipkart had 2.7 million unique visitors in November. Of course, all these are not buyers, but the trend signals the industry is set for a big leap.

Princely Stakes
Saudi's billionaire Prince Alwaleed bin Talal has bought a stake in Twitter for $300 million. The prince says he wants to invest in "promising, high-growth businesses with a global impact". Nephew of Saudi king Abdullah, the prince holds a fortune worth $19.6 billion and owns 7 per cent in News Corp. One hopes bin Talal knows well that social media including Twitter did play a crucial role in the Arab Spring revolts.

What's Brewing?
United Spirits, flagship spirits company of Vijay Mallya's UB Group, plans to raise about Rs 1,190 crore via foreign currency convertible bonds to cut debts. One of the top three spirits majors in the world, the company reels under a debt of about Rs 7,000 crore. The bonds issue is expected early next year.

Happy Giving
The government has allowed companies to issue additional equity shares to foreign investors if they already hold stakes in the company. This can be in lieu of the dividend income. The approval comes with riders, though. For one, it is subject to the regular conditions on valuation and pricing norms laid down by the Reserve Bank of India.

No, Axiata
The foreign investment promotion board has said no to Mauritius-based Axiata Investments 2 India's plan to increase the stake in Idea Cellular by buying shares from the stock exchange. The Axiata Group, a telecom giant, currently holds 19.97 per cent in Idea through various group companies.

Merge To Sell
Shriram Transport Finance will merge with its unlisted parent Shriram Holdings Madras. The move will make it easier for US-based private equity firm TPG# Capital, which holds 49 per cent in the firm, to sell its stake.

Losing All The Way
Rs 1,300 per head. That's the money India's airlines lose on average every time a passenger boards an aircraft, says consulting firm Centre for Asia Pacific Avia-tion. It says the industry is set to post a record loss of $2.5 billion this fiscal.

Aping Apple
Apple has won a patent breach plea against HTC, prompting the US Interna-tional Trade Commission to ban sale of some HTC smartphones in the US starting next April. Experts say the ruling will help Apple efforts to prove that devices running on Google Android operating system are copies of its iPhone.

Buying Formula
Aiming to give a booster shot to its formulations business, Ahmedabad-based Zydus Cadila has bought Mumbai-based drug firm Biochem Pharma for an undisclosed price. A mid-sized player, Biochem has sound presence in areas such as antibiotics, cardiovascular, anti-diabetic and oncological segments. In FY2011, it reported sales of Rs 264.5 crore.