Geared Up To Cash In 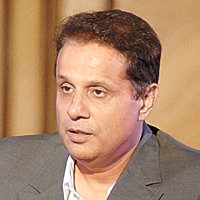 08 November, 2014
Print this article Font size -16+
Bollywood — what do you think of when you think of Indian Films? Family values, friendship, love and romance. These core values are what drive audiences around the world to watch, enjoy and experience Indian content. However, the accessibility of this content around the world is not to be taken for granted. It has been a long journey to bring Indian cinema to your doorstep, one I enjoyed and learned greatly from.

The business was started by my father, Arjun Lulla. Together we worked and sold rights of our movies to international distributors. Surprisingly, our buyers were from Israel — not the market that would first come to mind! I was motivated by the high Internal Rate of Return (IRR) that distributors in foreign markets were achieving and, at 21, I packed my bags, left home and moved to Israel. Unfamiliar with the language and the culture, there were several barriers which I had to overcome, but the first deal I made is etched in my memory. The results were satisfying. I knew I had made the right decision.

However, I had dreams of taking Bollywood around the world. I looked for a market with a large South-asian diaspora and moved to London to set up my base. The Film industry at that time, however, was suffering — back home and around the world — VHS had taken the industry by storm. Families were no longer going to cinemas; the whole movie experience seemed to be more satisfying from the comfort of one’s own home. Eros embraced VHS.

Systematic growth over time has enabled Eros to effectively distribute over 70 films a year in 50-plus countries in 25 different languages both dubbed and subtitled. Our strong distribution network in conjunction with our large and diverse library has further ensured that we constantly gain first mover advantage. We pioneered international VHS distribution, entered the first Indian exclusive VOD agreement with Comcast in the US, launched the first most watched Indian internet channel on YouTube, and launched a first-of-its-kind on-demand internet entertainment portal: ErosNow.

I found many Hollywood studios taking an interest in the large number of films that India was churning out every year at a fraction of the cost. Suddenly it dawned upon me that Eros could either start to consolidate the industry or get consolidated by heavy Hollywood cheques. This as my motivation, I studied the growth and business of the Hollywood industry very carefully so that Eros could build its own model.

We have a strong belief that content is key to achieving future growth. And, India, has all the right metrics for high media consumption: a growing 600 million middle class, second-largest mobile user base in the world, third-highest consumption of mobile internet, digitisation of cable TV, rolling of 3G and 4G services.

Organic growth is also quietly working its way among cinema screens. Currently India is deeply under-serviced by the number of screens vis-a-vis its population, therefore multiplexes will naturally grow. Multiplex screens across the country are estimated to double in the next five years, to more than 2,200 screens in 2016.

The next 10 years will be crucial and exciting for the media and entertainment industry; we are geared up to capitalise on all opportunities.

The author is the executive chairman of Eros International