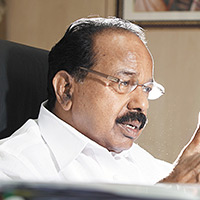 08 November, 2014
Print this article Font size -16+
Stoutly defending the hike in gas prices, Oil Minister M Veerappa Moily said the move would benefit the government in terms of revenue as many gas discoveries have been made by public sector companies rather than private sector.

"I think as much as 90 per cent of gas discoveries have been made by the public sector companies and remaining 10 per cent by private companies. Hence, 80 per cent of the income or profit from these explorations will come back to the government as revenue," he told reporters here.

The Cabinet Committee on Economic Affairs had on 27 June approved pricing of all domestic gas through Rangarajan formula from 1 April 2014. The price of gas as per the formula is likely to be about $8.4 per million British thermal unit as opposed to $4.2 currently.

Private companies, about which the opposition is making much hue and cry, is not producing even 5 per cent of gas, and hence there is no question of anybody getting any windfall profit, he said, apparently referring to Reliance Industries Limited.

Moily said the money earned by the country will have to be preserved and reinvested, instead of draining it to other countries. In the last six years, the US and China have been producing 40 to 50 per cent more because no foreign investments were flowing into their countries, Moily said. "Whereas our country is going back (nowhere). It doesn't stand any logic, neither economic nor national," he added.

Moily said several gas discoveries of firms like Oil and Natural Gas Corporation and RIL have been declared unviable by the Directorate General of Hydrocarbons as current gas price of $4.2 per million British thermal unit was inadequate to cover the cost.

The Minister said the country cannot survive if it was importing Rs 8 lakh crore worth petroleum products. He also rued that the country is not in a position to explore oil and gas, because of lack of interest by investors.

"As a minister I cannot preside over a sick ministry. I would like to take it forward so that the country secures independence in energy sector. We need to attain it and it is possible to do that," the minister said.