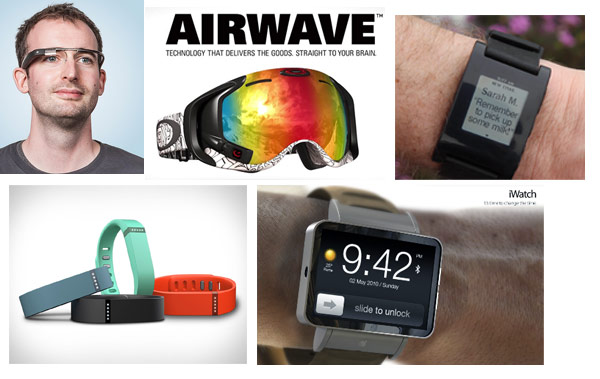 08 November, 2014
Print this article Font size -16+
There was a time, not too long ago, when wearable computing would mean a bunch of lights and circuits somewhat awkwardly sewn into your clothes. Boy, have we come a long way or what! Gadgetistas the world over are abuzz with excitement with recent developments in wearable computing, and the continued morphing of man and machine seems to be the next big shift in technology. Analysts at Juniper predict the market for smart wearables will more than double over the coming year, jumping up to more than $1.5 billion by 2014 and at least $6 billion by 2016! Here’s my pick of what’s hot in the space.

Google Glass: Leading the charge, the elephant in the room, is Glass – Google’s Internet-connected eyewear with an integrated heads-up display and camera. The core of Google Glass is a tiny prism display that sits a little above your direct line of vision – you see what’s on the display by glancing up. Voice control is used to control the device, which includes taking pictures, videos, sending messages, 'hanging out' or videoconferencing with your friends and showing them a “see what I can see” visual. Or you know, if you wish, to search via Google. The potential is awesome and borderline scary, all at once. Imagine having driving directions appear in your field of vision, searching on Google or just being able to record and sharing a video/photo just by saying a word. Actual details of hardware – what spec camera and GPS chip and Android version it will pack in – are scarce though. Privacy issues, a conspiracy theory that Google will attempt to monetize your eyeballs by blasting you with ads everytime you look at something, and the theoretical possibility of your being filmed anytime you’re around someone wearing Google Glass aside, Glass represents a massive leap forward in enriching and augmenting your field of vision!
Due when: End-2013

Oakley AirWave: If you enjoy snowboarding and skiing, Oakley’s AirWave can revolutionise the way you experience the sport. Integrating GPS, Bluetooth and a heads-up display into a set of premium snow goggles, Airwave gives you access to a veritable avalanche (if you can pardon the choice of words) of information, including speed, distance travelled/climbed, and well, incoming calls and text messages from your phone as well. The Airbrake is controlled via a wireless wrist remote that resembles a watch, with big chunky buttons that can be controlled without removing your gloves. And here’s the clincher – with GPS enabled, the wearer can pinpoint their current location and overlay it on a map to see the exact route you need to take. Heck, I can imagine a few serious bikers will want this too!
Due when: Available now

Pebble: With mobile phones having replaced watches for many, our wrists are now free for a new wearable device, and the Pebble smart-watch could be it. Rather than serving as a standalone device, Pebble talks to your iOS or Android smartphone over Bluetooth, discreetly giving you ‘hands-free’ access to a bunch of data from your phone – who’s calling, SMS/email/social network alerts, what’s playing on your music playlist, all in one glance and with a wrist gesture that we’re all familiar with – checking our watches! What's more, its side-mounted buttons can be used to pause, play, or change tracks when you're listening to music, and you can answer or reject a call with a simple press. Imagine how liberating this can be – not having to pull your phone out of the pocket everytime you receive a notification – with Pebble, you can easily glance at your wrist and see whether it is a text or an email which requires your immediate attention. But that’s not it – with apps on your smartphone that talk directly to Pebble, the possibilities of what can show up on the Pebble are practically endless.
Due when: Available for pre-order

Fitbit Flex: Wearable fitness gadgets aren’t that new; we’ve had Nike+ accessories measuring our every step for many years now. But the new range of fitness gizmos, like the Fitbit One I reviewed recently, or the new Fitbit Flex wristband that you wear on your person 24x7 monitor your activity levels, even when you’re asleep. It syncs back to your smartphone and the companion website to show you complex analytics around steps taken, calories burned – basically a full rundown on how active you are!
Due when: April

Apple iWatch: Heavily rumored to make an appearance soon is a smart watch from Apple – let’s just call it iWatch for now, shall we? The rumor mills are brimming with possible specs – that it runs the iOS platform and talks to the iPad/iPhone (makes sense), features kinetic charging so you’ll never have to change batteries, and maybe even packs in a speakerphone to place calls directly from your wrist, Dick Tracy style!
Due when: Ask Tim Cook!

What’s next? Clothes that can serve as temperature or volume controls? Phones that can monitor your vitals and call someone in case of an emergency? Write in and tell us what you’re looking forward to!