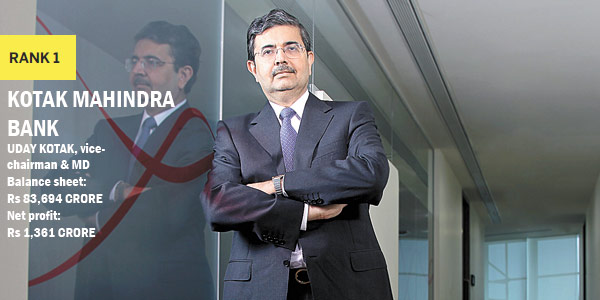 08 November, 2014
Print this article Font size -16+
It was a freak throw-in from short extra cover that knocked Uday Kotak out of the prestigious Kanga League in 1979 — and, from cricket all together. “The ball hit him on the head and he collapsed. Doctors who treated him then told me: ‘We’re trying to save his life. We’ll be lucky if he manages to survive. But, for sure, he’ll lose some of his mental faculties’,” says  80-year-old Suresh Kotak, Uday’s father. “If that ball had not hit him, Uday would have been a cricketer. But that incident shook us all and my father, Uday’s grandfather, asked him to stop playing cricket,” adds Kotak Senior.

For the record, the vice-chairman and managing director of Kotak Mahindra Bank (KMB), before he became a banker, was an accomplished cricketer — a batsman to be precise — coached by none other than Ramakant Achrekar, the man who mentored the likes of Sachin Tendulkar, Vinod Kambli and other talented Mumbai players.

“You know, my biggest claim to fame is that I learnt cricket under the same person who coached Sachin. Achrekar was my coach well before he coached Sachin. And, if I was not hit on the head, I’d have seriously thought about cricket,” says Uday.

Uday went on to recuperate with his mental faculties intact. He founded KMB, which is the Best Mid-size Bank in BW | Businessworld’s Best Banks Survey 2013, with a loan book of Rs 68,226 crore, a net worth of Rs 17,868 crore, assets to the tune of Rs 1,14,631 crore and September-quarter profits of Rs 583 crore. These, and the numbers that KMB has logged over the past three years, helped the bank to a podium finish.  Superior asset quality and good corporate governance also stood it in good stead. With regard to non-performing assets, the bugbear of most Indian banks, KMB is comfortably placed at 0.8 per cent. It has managed to get its lending portfolio right thanks to its pedigree as an NBFC. If KMB had not become a bank, and continued as an NBFC, it could have been among the top 20 NBFCs (out of some 4,000) that survived the tumultuous 1990s.

“Banks take risks on a daily basis, but you have to measure risk and price properly. If you get these two parameters right, banking is a virtuous business; otherwise, it becomes a vicious business,” says Uday, sitting in his new office in Mumbai’s Bandra-Kurla Complex. “You are in the business of safeguarding depositors’ money. You’ve got to be sure the bank is run prudently,” he adds.

If one considers long-term averages, KMB has recorded an over 30 per cent growth in demand deposits, a 28 per cent gain in advances, a 26 per cent increase in core fee income, 27 per cent growth in operating profits and a 32 per cent growth in total deposits. All this by a bank formed just 10 years ago.  “I focus on my balance sheet. We give loans when we have reasonable certainty that the money will come back. Risk has to be measured well and banks have to be fair to customers. Do not squeeze the lemon so much that it gets bitter,” adds Uday.

The KMB management has set stiff targets, which include expansion of branches from 500-odd currently to a thousand over the next three years. The bank is also trying to widen its depositor base by adding over 60,000 new account-holders every month. By doing so, KMB is looking to shrug off the “banker to the class” tag given to it by analysts. Uday and his senior team are also trying to achieve a balance between banking and capital market revenues. “Uday will be able to do all that. He’s a very ambitious and energetic man. It is his hard work that helped him raise a bank like KMB,” says veteran investment banker and head of DSP Group, Hemendra Kothari.

Uday’s approach is now being followed by several mid- and small-size bank executives. Many are focusing on the fee-income model that KMB adopted in its initial years.  Others are on an overdrive to get demand deposits.  “I don’t know if anybody is following us, but I want to clear one thing. When we offer 6 per cent on deposits above Rs 1 lakh, it is the same for depositors who have parked Rs 10 crore or Rs 100 crore. We do not keep changing rates depending on the value of deposits. Some banks, I’m told, are doing that. The moment you do that, you are making a money market fund out of a simple savings bank product,” says Uday, forcing you to ponder whether that was a dig at some of KMB’s closest competitors.

Considering he has managed to keep his wicket intact for two decades, the cricket lessons weren’t in vain.