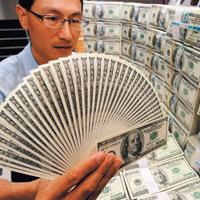 When the Group of Twenty (G20) leaders met in Pittsburgh last week, nothing was said about the topic that was foremost in the run-up to the meetings: the need for an alternative to the US dollar as a global reserve currency. Much that was said after the meetings suggested the opposite, and drove the dollar's value up against other currencies. Here are a few samples: Alexei Ulyakayev, first deputy chairman of Russia's central bank, said that Russia would maintain 30 per cent of its foreign exchange reserves in dollars. Saudi Arabian officials said they had no plans to change the currency composition of their forex reserves, as did the UAE central bank governor.

The dollar's strength was further buttressed by Japanese Finance Minister Hirohisa's statement about possible intervention in the currency markets to maintain Japanese export competitiveness: read that as a weaker yen. The biggest kicker of all is in the numbers. Take those from China, perceived as one of the strongest backers for an alternative to the dollar. At the end of June this year, US Treasury securities accounted for 36.4 per cent of China's foreign exchange reserves, up from 29.6 per cent in June 2008. And let's not forget that the higher share is of a higher level of reserves too: they were $1.80 trillion in June 2008 and $2.14 trillion in June 2009.

When the International Monetary Fund releases its quarterly report on the Composition of Foreign Exchange Reserves, chances are that the latest figures will underscore the dollar's pre-eminent position in global currency markets and central bank reserves. It is the Tina factor: There Is No Alternative.