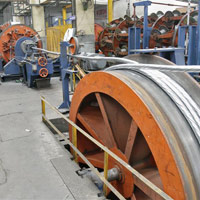 08 November, 2014
Print this article Font size -16+
US-based Institute for Energy Economics and Financial Analysis (IEEFA) has raised questions over the Indian conglomerate GVK's proposed $10-billion Alpha coalmine, port and rail project in Australia, warning potential investors that it was uneconomical and represented an unacceptable level of risk to them.

The latest report was released today by the organisation under the name "Stranded: A financial analysis of GVKs proposed Alpha Coal Project in Australias Galilee Basin"

According to IEEFA statement, the report comes amid Australian rail operator AURIZON negotiating for partnering with Indian conglomerate GVK on the construction of the rail and port components of the Alpha project at a cost of USD 6 billion.

Commenting on the risk profile of the project, the co author of the report Tom Sanzillo, former first deputy comptroller of New York, labelled GVK "a weak investment partner" and the Alpha project "a quagmire, not an investment".

GVK is seeking to raise a total of $10 billion capital to build Australia's largest black coal mine in Queensland's remote, untapped Galilee Basin.

Besides, it would also involve construction of 500 KM of rail infrastructure across agricultural land and floodplains to the coast and to develop a highly controversial coal export terminal through the iconic, UNESCO World Heritage listed Great Barrier Reef.

The IEEFA report has also alleged the Indian company is overcommitted. It said with 16 greenfield infrastructure projects worth $20 billion across six asset classes, it is highly overleveraged, carrying debt of $2.8 billion with a market capitalisation of only $243 million.

This will likely delay the project and escalate costs to the extent that the project is unviable even for a company with a healthy balance sheet, it said.

GVK purchased its Galilee Basin coal deposits from Hancock Prospecting in 2011 for $1.26 billion near the peak of the coal price cycle of $133 a tonne, a deal for which it was awarded "Asia Deal of the Year".

The coal price has since slumped to $88 a tonne with cost of production at more than $70 a tonne, as major coal producers now sell, downscale and cancel greenfield projects in response to the weakening global coal outlook, the report said.