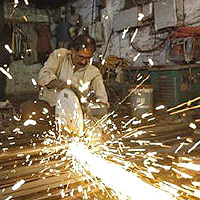 India's growth slowed for the fifth consecutive quarter in the latest sign of cooling in the big emerging BRIC economies. Brazil's economic activity fell in June from a month earlier, the first such drop since late 2008, while China posted slower growth in its June quarter.

While gross domestic product in Asia's third-largest economy fell below 8 per cent for the second straight quarter, the Reserve Bank of India is expected to continue with its monetary tightening to fight inflation that remains above 9 per cent.

In the latest data released by the government Tuesday, GDP growth for the April-June quarter of the 2010-11 fiscal has also been revised downward to 8.8 per cent from the earlier provisional estimate of 9.3 per cent.

In addition, the mining and quarrying sector grew by just 1.8 per cent during the quarter under review, as against 7.4 per cent growth in the first quarter of the previous fiscal.

However, farm output showed an improvement, expanding by 3.9 per cent during the quarter under review, compared to 2.4 per cent in the corresponding three-month period last fiscal.

The services sector, including insurance and real estate, grew by 9.1 per cent in the June quarter this year, compared to 9.8 per cent expansion in the corresponding period last year.

"The latest growth number reinforces the view that although growth is slowing down, it is not collapsing as feared by some," said Ashutosh Datar, economist at IIFL in Mumbai, who said another 25 basis point increase at the central bank's next policy review on Sept. 16 was likely.

With the government preoccupied by corruption scandals that have stalled approval of legislation and projects that could help ease bottlenecks in the economy, RBI has struggled in its battle with inflation.

The RBI has raised rates 11 times since March 2010, including a sharper-than-expected 50 basis point increase last month, but headline inflation for July still came in at 9.22 percent, well above the central bank's 4 to 4.5 percent comfort zone.

The RBI has made clear that containing prices is its priority, even as debt woes in the United States and Europe darken the global outlook.