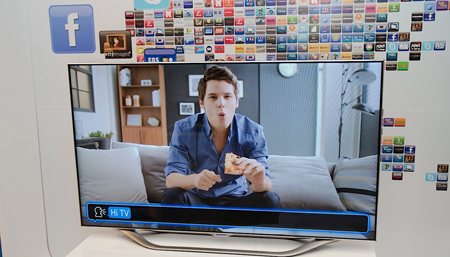 If you could step into the future of television, what would you find? That’s the question Samsung is posing to us, and their answer is the new ES8000 Smart TV. It certainly is the most techno-packed TV I have ever seen, but are all the bells and whistles worth the ‘Smart TV’ tag and the premium pricing? Let’s find out!

For a 55-inch TV, the ES8000 is one good looker, with an extremely sleek profile and a thin aluminum bezel. The massive panel is glossy in finish, which gives you great blacks and punchy images, but also saddles you with annoying reflections. Connectivity options are comprehensive – there are three USB ports, an optical digital out, a SCART in (via the included adapter), audio in and a combined composite/component in. Yet, surprisingly, it has only 3 HDMI inputs, and I quickly ran out of high-def input options once I’d plugged in the HD media player, the PS3 and the DVD player. The iPad will have to wait its turn, I guess. On the bright side, Wi-Fi is built-in, as is the integrated wired Internet LAN port.
Using the TV straight out of the box, picture quality is very bright and high on contrast, though some of you might want to try out the various picture modes to find one more suited to your tastes. The TV’s image processing engine handles tasks such as upscaling and 2D-to-3D really well, and while I’m not a big fan of 3D, this TV checks off the boxes on that front as well.
It’s really the ‘Smart’ TV features then, and how they perform, that will decide the fate of this TV. With the ES8000, you get the Smart Hub, a central access point for all of the TV features as well as Internet services (Skype, web browser etc.) and downloadable Samsung apps. The latter include tons of the regular Facebook and Twitter apps, along with some exclusive apps that let you share content within the family or track your fitness. Samsung likes to highlight its new "Family Story" app that lets friends and family exchange messages and photos.
With all these smart features came a challenge – how do you use them via a traditional remote? You could use the built-in voice commands, a library of recognised words, to do things like change the channel, volume or the source, or even control a few Samsung apps. While the feature works fine from a technical standpoint, it’s really not that practical to use and I often found the remote to be a faster alternative. The TV takes its time to process the voice command, which quickly gets old.
The same holds for the gesture control, which is far too dependent on the ambient light and how quickly your patience runs out. Once you've extended your hand towards the TV, it takes a few second before the TV recognises this and displays the cursor. Controlling the cursor works fine most of the time, although it depends on the distance to the TV and the ambient light. With too much backlight gesture control becomes almost useless. Besides, if your TV is wall or table mounted at a height, you’ll have to get up to be in the line of sight of the camera? Fat chance!
Once the novelty wears off, I’m willing to bet that you'll rarely use the voice and gesture controls. Maybe when you have guests over…to show off? A window into the future they may well be, but there’s a lot of refinement needed before I’ll be ditching that remote control.
Speaking of which, the smart touch control, which Samsung includes alongside the regular remote, is the real find of the day. It works well in conjunction with the Smart Hub and lets you navigate through the apps in a really intuitive fashion – it really looks as if it was designed with a smart TV in mind.
That, and the promised Smart Evolution kit – the potential to upgrade your TV internals and prevent obsolescence by the time next year’s models come out - are the real reasons I’d want to bet on this TV. Smart Evolution in particular is an interesting development, but I’m eager to see what type of upgrade Samsung will introduce next year. Clearly, adding new features will be limited to upgrades that don’t require new sensors, and some of the existing hardware that’s in place, such as the camera, cant be upgraded via this route. What you can expect is faster processors, more memory and other hardware improvements that would otherwise happen under the hood. I just hope it isn’t an excuse to add features that can otherwise be dealt with via a software update.
The Samsung ES8000 is clearly ahead of its time, and you’re paying a premium for that. While there's still room for in the motion and voice control systems, it's the first TV out there to integrate this kind of function. While there may be other less expensive HDTVs that arguably deliver better value-for-money when it comes to 2D picture performance in a darker viewing environment, the Samsung UE55ES8000 remains one of the best LED LCD TVs I’ve seen lately. And the Smart Evolution feature may just provide you with an argument in this TV’s favour if you’re trying to sell this purchase to a spouse!
Rating: 8/10
Price: Rs 2,73,000 for the 55-inch variant
URL: http://bit.ly/NFy4rf
technocool at kanwar dot net
[email protected]
Tags assigned to this article:
tushar kanwar exclusive to web more 4 samsung technocool 3d apps bluetooth plantronics television smart tv backbeat go