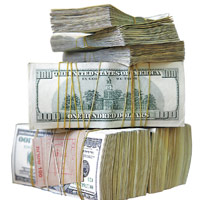 Infrastructure
For the sector to keep pace with India's growing economy, it needs investments of $1 trillion during the 12th Plan, and that requires the government to open up specific verticals for private and foreign investment. "There is a clear need for strengthening the market for corporate bonds," says Soumya Kanti Ghosh, director of research at the Federation of Indian Chambers of Commerce and Industry.

The government should allow pension funds, provident funds and insurance companies to place their money in investment grade corporate bonds. "While corporate bond repos have been allowed since March 2010, the RBI has mandated a very high haircut of 25 per cent, making them unattractive. Lowering the haircut margin needs to be considered," says Ghosh. Also, foreign currency bonds by Indian companies have to be made more viable by reducing the tax on interest payable.

Civil Aviation
The sector has been facing one crisis after another and airlines such as Kingfisher and Air India are cash strapped. Last year, there was only one airline in India which could claim to be profitable. Little wonder, a proposal for opening aviation for foreign capital is being discussed at the ministerial level. Currently, only non-airline corporations, non resident Indians and institutional investors can buy a stake in domestic airlines. But now, the government is discussing to allow 49 per cent stake to foreign airlines in domestic carriers. Allowing FDI in the aviation sector could bring in a few hundred million dollars over a period of time. However, critics say that no global airline would want to take a stake  less than 50 per cent in a badly run or a loss making airline. But a signal that foreign investment is welcome in this sector does send out the right message.


break-page-break
Coal And Mining
According to the coal ministry, there is a demand for 713 million tonne (MT) of thermal coal for power plants while domestic production is estimated at 629 MT, the balance being imported. Power projects worth thousands of crore are awaiting coal linkages. But the current government policy does not allow commercial mining. Private mining is allowed for only captive plants. So, let alone foreign capital, even domestic private capital cannot be deployed in this critical sector. The government needs to rethink.

Power
While 100 per cent FDI is allowed in the sector, the funds have at best been trickling in. Between April 2000 and March 2011, the power sector received FDI worth only $5.9 billion. Investors have been shying away from the power sector for several reasons including environmental hurdles, project delays and fuel supply issues. Once coal linkages are in place, power generation will suddenly look more bankable. However, a lot more needs to be done to make the sector more attractive. Supply of power should be encouraged in the short-term under the open access regime. Consumers should have the liberty of buying power from from suppliers of their choice. Power generators should also have a similar freedom.

"Renewable power obligation by states should be implemented soon. Also, because all public sector banks have reached their power sector lending limit, the government needs to ensure that capital flows continue. The country can expect investment of $250-300 billion in the power sector once these issues are resolved," says T.P. Chopra, CEO of Bharat Light and Power, and former India head at GE.

Railways
The cash-strapped railways are facing a huge backlog of pending projects — worth Rs 1 lakh crore — but they are exempt from both domestic and foreign capital. There is now talk of the  railways planning to opt for a build, operate and transfer (BOT) model as part of a new investment policy to invite private participation. Foreign direct investment, though, is still a strict no. With intelligent restructuring, private capital can help bring in efficiency and accountability in the railways, which, in turn, will boost the ancillary industries that depend upon and support this

Insurance And Banking
The insurance industry could lose more than Rs 10,000 crore this year. The sector has an FDI limit of 26 per cent and has been demanding that the limit be raised.

Increase in FDI and FII limits is also a pending demand of the banking sector. Currently, banks have a limit of 74 per cent, inclusive of FDIs and FIIs. But within this, FII is capped at 49 per cent. The government can maintain the overall limit of 74 per cent, but it needs to free up the ratio of investment.

There is no single move that can bring in money, and capital cannot be expected to flow into a single sector: "FDI will be driven by a more long-term perception of India's growth story. Policy reforms for improving the investment climate will lead to a further strengthening of such flows," says Banerjee. Adds economist Bibek Debroy: "There are issues with land acquisition and forest clearances. The government should address these."

The coming budget will be critical in changing the sentiment if not capital flows. A few positive steps from the government could do wonders to its coffers.

The author is a senior business writer