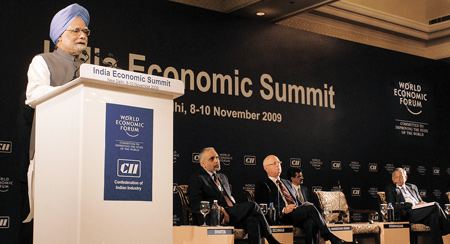 The 25th edition of the annual India Economic Summit that concluded on 10 November in New Delhi was held in the backdrop of a changed global economic environment. A year since the global financial crisis unfolded, India is still one of the fastest-growing economies in the world. The India growth story is not over yet, as was evident in the three-day conference with the underlying theme being "India's Next Generation of Growth". While Prime Minister Manmohan Singh called for financial sector reforms, Road Transport Minister Kamal Nath declared a ‘decade of infrastructure'. The summit saw participation of top politicians and cabinet ministers, corporate leaders and academicians.

Standing Ovation
Prime Minister Manmohan Singh said the rollback of stimulus will start from the next financial year. He also indicated the much-needed reforms in the banking and insurance sectors. "We need to develop a long-term debt market, and deepen the corporate bond market. This, in turn, calls for strong insurance and pensions sub-sectors," he said. During the question-answer session after the PM's speech, Klaus Schwab, chairman of the WEF, said he had eight questions. While the seated Schwab shot off his first, the PM walked to the dais and replied. Scwab sat and asked, the PM stood up and replied to them all!

Clearing The Roadblocks
A cautious, but confident, Kamal Nath said he did not want to be drawn into a comparison with China. "We have had our decade of information technology, now let's have our decade of infrastructure". He also said a few mega projects would be opened over the next 4-6 weeks, and the first project would have a size of about $1 billion. "By next year, we are going to set up a separate expressway authority," said Nath.

Show Stealer
As the summit sputtered along in the absence of any eye-popping announcement, gave the news-starved media something to bite into: he said that Renault-Nissan would make the cheapest car in the world. However, the company that is supposed to develop and manufacture this frugal car, Bajaj Auto, was not even represented on the dias. But Rahul Bajaj, chairman of Bajaj Auto, who was at the summit, insisted that Bajaj Auto had not yet agreed to having only Renault-Nissan's brand on the car.

Women On Top
During the session on female talent, moderator Nik Gowing asked Kingfisher Airline Chairman Vijay Mallya if deployment of women makes good business sense. Mallya immediately shot off with details of how Kingfisher Airline became the first to have an all-women crew and how he was toying with the idea of doing something similar for his Formula One team. "Would you be breeding the first female F1 driver?" Gowing asked. "Don't take me literally," he was quick to add.

Cloud Over Innovation
Is India lagging behind in innovation? Aping the West will not work for India, said at the panel discussion on how India can be an innovation hub.

Innovation involves "more than fancy gadgets available in the international market. We want regional innovations which are scalable." Innovation has to be done more around socialisation. The discussion boiled down to how cloud computing can change the way people are looking at innovation, and how it will be important to solve emerging market issues like piracy.

Articulating Vision
The highlight of the session on India's Next Aspiration was marketing and corporate guru C.K. Prahalad's speech. While he confined himself mostly to what he said in [email protected], it was Raghuram Rajan, former chief economist with IMF and now an honorary advisor to the Prime Minister, who came up with new thoughts. Prahalad spoke on the 2020 targets, whereas Rajan said whatever India had been able to achieve so far had never been articulated strongly at a global level; he explained how this is a failure of academicians.
lesson on market forces

Lesson On Market Forces
At the session on higher education, a speaker, who recently set up a university, rued the absence of market principles in education. But he was quickly reminded by Human Resource Development Minister Kapil Sibal that the future of students cannot be left to the vagaries of market forces. "Companies can be shut down if they are not profitable, but institutes cannot be," he said. When the speaker clarified that this is not what he meant by market forces, the minister said, "Well then don't talk about it."

Stung By Officialese?
Duringthe session on collaborative bureaucrats, Minister of State for External Affairs Shashi Tharoor took a dig at babus. Talking about this obstructionist role, he said, "Whenever I go to the concerned officials in the ministry with some development plan for my constituency, they ask me to get a project report from the local-level body. Since local-level bodies are never in a position to prepare such reports, the work never gets done," he said.

Bad Climate
In the session on climate change, Shyam Saran, the Prime Minister's special envoy and India's chief negotiator on climate change, bluntly said the news on the global climate agreement front was bad, and the negotiations did not reflect the sense of peril ahead. Equally candid was Nicholas Stern of London School of Economics, who said the developed countries might impose high emission taxes on imports from the developing countries.