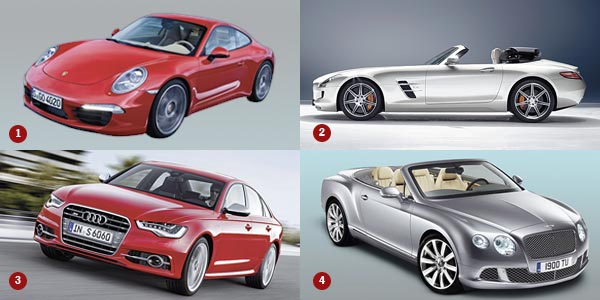 LUXURY CARS
Hogging the limelight was the Lamborghini's Super Trofeo Stardale with its 570-horse power V10 engine that can do 0-100 kmph in 3.4 seconds. If that is not enough, the Ferrari 458 Spider aims to achieve the same speed in 3.5 seconds with a V8 engine. Aston Martin's V12
Zagato, too, is for those who are in love with the fast lane.

And then there is the super-SUV, Hemera, by UK firm Eterniti Motors. It is expected to be built in London, have a top speed of 180 kmph, a carbon fibre body and a 620-horse power, twin-turbo V7 engine. Italian brand Maserati showcases its first-ever SUV, the Kubang, which could be in production soon.

CONCEPT CARS
A superbly designed and sporty concept car was the BMW i8. It seats four, and can do 0-100 kmph in under five seconds. Another concept that made the mark was Jaguar's C-X16 hybrid, a smaller XK. It has an electric motor that kicks in for short distances and powers the car at 90 miles an hour.

Smart's ForTwo and VW's Nils electric cars are futuristic in design and transmission. The ForTwo has plastic wheels and hexagonal cut-offs (solar panels) on its semi-transparent roof. VW Nils is a single-seater, powered by a 15-KW electric motor and a 5.3 KW/hr lithium ion battery. Its transmission is like Reva's but the battery charges to full power in two hours, while the Reva takes 5-8 hours.