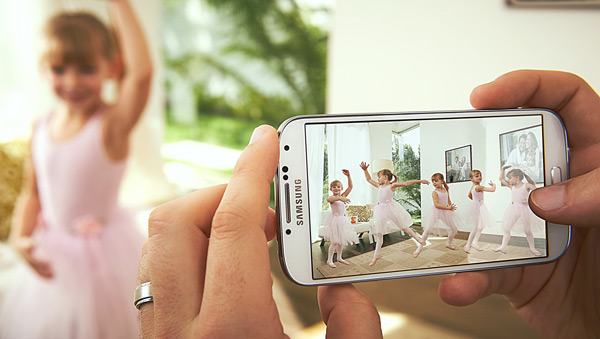 08 November, 2014
Print this article Font size -16+
Carpet-bombing. Yep, that’s the phrase I often use to describe how Samsung has peppered the length and breadth of the smartphone landscape with the Galaxy range, which has undoubtedly been responsible for its market domination. Even so, Samsung reserves the aces up its sleeve each year for its flagship “S” range. Does this year’s S4 pack enough of a punch to stake claim to being the best smartphone out there, and are the new features – and there are just so very many of them – worth having? Read on…

So, what’s on offer? I think a better question is – what doesn’t the S4 offer? Design wise, little has changed as compared to the S3. Under the hood, it’s a totally different story. If there ever were a phone with everything, the one item on the menu with all the toppings, this would be it. The S4 packs in Samsung’s latest Exynos 5 Octa processor, which features two pairs of quad-core processors, one for everyday tasks and one for the heavy lifting - an approach that’s supposed to deliver battery benefits on day-to-day use. Bear in mind, only one of the quad-core processors works at any point of time. Coupled with 2GB of RAM and 16GB of internal memory and ton of sensors (right from a barometer to a humidity sensor), the S4 ticks off the checkboxes of what is expected from a top-notch flagship in 2013.

Now, while it isn’t the first phone to sport a full-HD display, the ultra-sharp 5-inch 1080p AMOLED display is a treat for the eyes, and is much improved in terms of color reproduction as well over prior Samsung handsets. The 13-megapixel shooter may not beat the HTC One’s in terms of low light performance, but is better in most other shooting conditions than any Android smartphone launched this year. In addition, it features some interesting shooting modes like the ability to click photos using both the front and rear cameras, recording ambient audio with photos or removing unwanted elements from a photo. The long hardware and sensor list packed into the S4 comes with an equally long stack of software extras – letting you use your hand gestures to flip between photos or answer/reject calls, eye tracking capabilities that pause videos when you look away, to name a few.

That said, true to that one item on the menu with all the toppings, many of these features are a mixed bag in terms of practical utility and reliability. Not to mention the impact all this bloatware has on the internal memory and overall performance, which shows the occasional lag despite the S4’s top-notch hardware. Also, simply having these all these features can be overwhelming to a new user. Luckily, Samsung ships the S4 with an “Easy Mode” to simplify things — if there’s a phone that needs an easy mode, it is the S4.

Feature-packed or feature fluff? Whichever way you look at it, the S4 gets a ton of things right – this is most certainly a “please everyone” device.