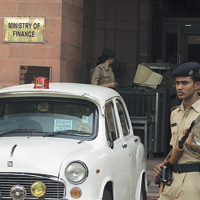 08 November, 2014
Print this article Font size -16+
Delay in core projects completion have led to cost overruns of Rs 52,445 crore, Parliament was informed on 7 September' 2012.
"As per the...report for the month of May 2012, the cost overrun was Rs 52,445 crore for the combined delayed projects of power (28), railways (36) and road transport and highways(84) sectors," the Minister of State (Independent Charge) for Statistics and Programme Implementation Srikant Kumar Jena said in a written reply to Rajya Sabha today.
Jena said the ministry monitors the implementation status of on-going central sector projects costing Rs 150 crore and above on the basis of information supplied by project implementing agencies.
The ministry releases a flash report every month on the implementation of infrastructure projects, he said.
The government has initiated steps for timely completion of projects. This includes rigorous project appraisal and two stage approval procedure, prioritisation of projects, setting-up on-line computerised monitoring system and higher weightage to project implementation by PSUs.
Standing committees are set up in various ministries for fixation of responsibility for time and cost overruns.
On projects in Gujarat, he said, 13 ongoing central sector projects each costing Rs 150 crore and above were approved during last three years.
The total original cost of these projects is Rs 26,368.82 crore and no cost overrun have been reported by the project implementing agencies in these projects.
Jena said only one project--Kakrapar Atomic Power Project 3 and 4-- has reported delay of 11 months due to late receipt of financial sanction.