Budgam (Jammu and Kashmir) [India], February 17 (ANI): A group of 24 diplomats from foreign missions, who arrived in Srinagar on Wednesday, interacted with locals in Magam block of Budgam district, as part of their two-day visit to the Union Territory.
French envoy Emmanuel Lenain and Italian envoy Vincenzo de Luca were seen talking to the locals in Magam block.
Earlier today, the diplomats landed in the Union Territory, where they were accorded a traditional welcome by the District Development Council (DDC) Chairman, Nazir Ahmad Khan and other panchayat representatives.
The foreign envoys were briefed on Panchayati Raj and grievance redressal through Back to villages and Block, thus elaborating how the administration reaches the doorstep of people.
Foreign diplomats from Chile, Brazil, Cuba, Bolivia, Estonia, Finland, France, Ireland, Netherlands, Portugal, Belgium, Spain, Sweden, Italy, Bangladesh, Malawi, Eritrea, Cote d'Ivoire, Ghana, Senegal, Malaysia, Tajikistan, Kyrgyzstan and the European Union are on the visit. 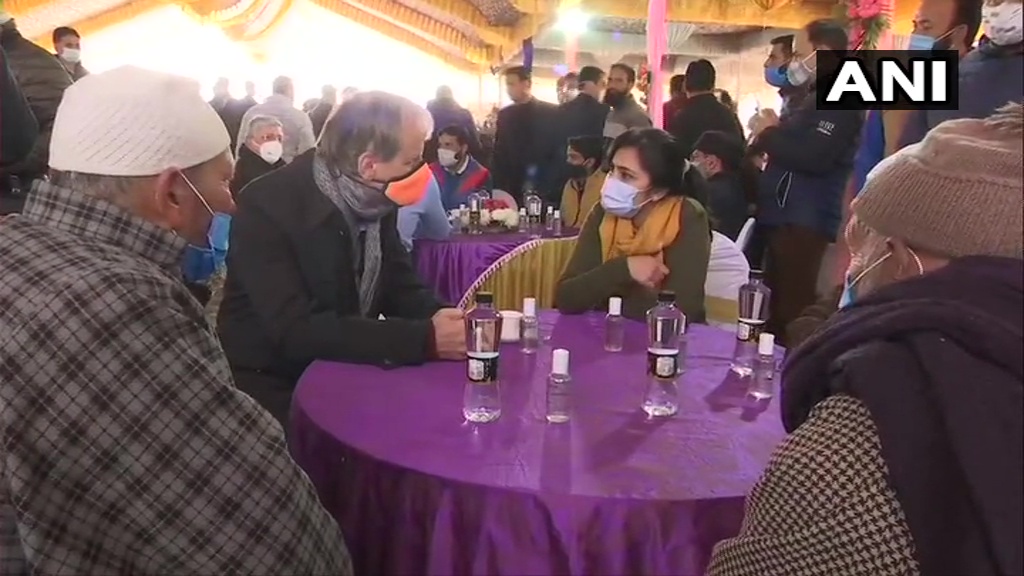 The latest visit of foreign envoys comes in the backdrop of District Development Council polls, which saw huge participation and restoration of 4G mobile internet in the entire region after 18 months, which many see as a return of full normalcy in the Union Territory.
This will be the first visit by foreign diplomats to Jammu and Kashmir since the outbreak of the COVID-19 pandemic. Two batches of foreign diplomats had earlier visited J-K in January and February last year after the abrogation of Article 370 in August 2019.
Sources told ANI that some elements, who are working against Jammu and Kashmir's progress and restoration of normalcy, have been giving calls of a shutdown during the visit of envoys.
In January last year, envoys of 15 countries including the then US Ambassador to India Kenneth Juster and diplomats from Vietnam, South Korea, Brazil, Niger, Nigeria, Morocco, Guyana, Argentina, Philippines, Norway, Maldives, Fiji, Togo, Bangladesh and Peru visited Jammu and Kashmir to see first-hand the efforts being made by the government in the region.
In February last year, 25 foreign diplomats, including those from Germany, Canada, France and Afghanistan, visited Jammu and Kashmir to witness the ground situation in the region. (ANI)