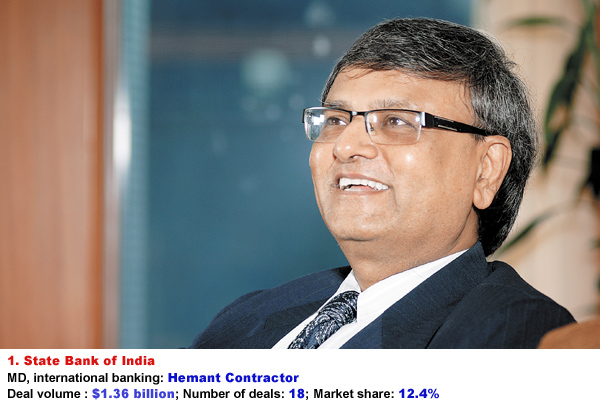 08 November, 2014
Print this article Font size -16+
Hemant Contractor, managing director of international banking and group executive at SBI, will be a busy man for the next four months. His clients — among the bluest of blue chip firms — want to raise a billion dollars in cross-border loans in a rather difficult market. He declines to name them, other than saying they are manufacturing firms, one of which is a steel maker.

Of late, after the Reserve Bank relaxed norms for foreign currency loans for exporters, there’s been a lot of interest among exporters wanting to raise funds through external commercial borrowings (ECB) to replace high cost rupee loans.

The regulars this year (and last year) were PSU companies like Rural Electrification Corporation, Indian Railway Finance Corporation and NTPC. “These companies enjoy a good credit rating and are able to command very good pricing because they are government-owned companies, their financials are sound and they regularly tap the foreign currency loan market,” says Contractor.

The slowdown has also impacted the business; not many companies have raised money. The global environment hasn’t helped either. “The next 6-8 months are going to be the same,” maintains Contractor. “But the per deal value may increase.” SBI also has a natural advantage, because most firms looking for cross-border loans are its own clients.

The foreign currency loan business will grow faster than short-term trade finance, in Contractor’s view. In 2013, he expects SBI to do about $3.5 billion in cross-border loans. Liquidity isn’t a problem, since SBI raises foreign currency capital from time to time, the latest being $1.25 billion in July this year through medium-term notes.

Despite its size, it’s not that SBI has no competition. There is the rising Japanese presence in the foreign currency loan market. Look at the league tables: this year the second and third largest banks in the cross-border loan business are Mitsubishi UFJ Financial and the Mizuho Financial Group. “The cost of money for Japanese banks is close to nothing and, therefore, they are a force to reckon with,” says a senior banker who requests anonymity. But while Contractor is aware of domestic and international competition, SBI’s bigger balance sheet and the strength of its domestic relationships give it an edge.