For The Love Of Running 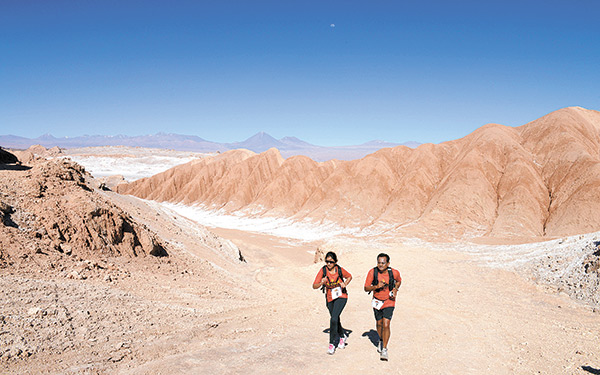 08 November, 2014
Print this article Font size -16+
Our passion for running began 11 years ago when we started jogging in a local park. Over time, we continued to challenge ourselves and began participating in races until we graduated to running marathons. We have run 25 marathons in the past eight years and are in the Guinness Book of World Records for being the only couple to run a marathon on all seven continents and the North Pole.
While we started with marathons in cities, our interest veered towards more adventurous marathons in out-of-the-way destinations. Here is our selection of adventure marathons that will provide unique experiences while pushing your limits.
The Safaricom Marathon Month: June
Location: Kenya
If you ever wanted to get up close and personal with a giraffe in its natural habitat, this is the marathon for you. The Safaricom Marathon takes runners through the Lewa Downs Reserve in Kenya. Runners are rewarded with fantastic scenery and the opportunity to see wildlife in their natural environment. During the course, you’ll run through various landscapes including savannah plains, along river banks and through woodlands. While the scenery is unique, the best part of the race is the wildlife. There are no boundaries between runners and animals, so you will come across giraffes, elephants, rhinos and even lions. The animals are not a threat because there are two helicopters and a spotter plane to ensure the predators keep a safe distance.
While this is an exciting race, it is considered to be among the most difficult in the world. The 1,000 participants have to race across a tough 21-km dirt loop while braving 30 degrees heat as well as an average altitude of 1,600 metres. While it is not an easy race, the rewards make it worth the effort.
Antarctica Ice Marathon Month: December
Location: Antarctica
While it is not the sort of desert most people imagine, Antarctica is the world’s largest desert. Antarctica is the coldest, windiest and most isolated continent on Earth and you’ll certainly battle these extremes during the race. We had to wait in Chile for three days in order to get a clearance window to fly into Union Glacier. While December is considered summer, we encountered minus 20 degrees temperatures with wind gusts that pushed the temperature even lower. We had to focus on not exerting ourselves too much because excess sweat would freeze on our skin. In addition, we had to keep our goggles on at all times due to the intensity from the sun and constant 24-hour exposure.
While the conditions were challenging, we were rewarded with a mind-blowing landscape including glacier formations that left us breathless. As we huddled in our tents at night, we appreciated the power of nature and the desolation of Antarctica. Almost 98 per cent of the continent cannot support life so it was a powerful feeling to realise that we were hundreds of miles away from any living thing. This was a truly magical trip and something that many runners will find difficult to top.
Atacama Desert Volcano Marathon Month: November
Location: Chile
The Atacama Desert is considered to be the driest place on Earth. The region receives .004 inches of rain in a year which translates to less than half inch of rain every 100 years! The desert has 60 volcanoes, of which five are active. During the race, it is possible to see ten volcanoes at once, which makes for an amazing view as you run. Due to the large number of volcanoes, most of the terrain consists of felsic lava flows, which makes it tough for runners to balance. Since the desert is so dry, runners are not able to cope with a water station every few kilometers and are required to carry backpacks with water bottles that they need to sip from every 2-3 minutes.
The race starts at 14,500 ft. and has a rolling course that takes runners up and down hills throughout the race. At about 35 km into the run, participants encounter rough terrain for 5 km alongside a gorge and need to carefully navigate the distance. The path is only wide enough for one runner and a misstep can be fatal. This was a tough run that left us exhausted, but we were exhilarated as we ran among the volcanos. During the race, runners come up along Lascar Volcano which has a permanent fumarole, or smoke billowing out of it. The adrenaline from being so close to that is hard to grasp.
North Pole Marathon Month: April
Location: North Pole
How often can you say that you have run on water? As a participant in this race, you’ll run on frozen water at the top of the globe! Since runners are on ice, the course shifts throughout the run and we noticed on our GPS that the starting point for the 3-km loop moved several hundred feet during the race.
Runners have to prepare for the unexpected during this race. We flew in from Norway but as we attempted to land, the ice runway cracked and water began gushing out. We had to wait for several days as the team built a new runway. This race is significantly more challenging than the Antarctica marathon. First, the temperature was around minus 35 degrees, which means you can have almost no skin exposure. The primary challenge is that the course has a lot of snow as opposed to an ice track, which means runners have to battle knee-high snow in certain areas. Also, runners need to watch out for crevices that can form instantly. While this is a challenging race, runners can claim to have stood on top of the world, which will put them in an elite group.

Gobi Marathon Month: September
Location: Mongolia
Mongolia is one of the world’s most sparsely populated countries, and during this race you will find yourself alone with your thoughts and truly with nature. Unlike commercial spectacles of large marathons, this is an intimate affair with less than 40 people participating in the half and full marathons. The race is in the heart of the Gobi Desert and a testament to mental willpower.
While all the runners start out together, we are quickly spread out and after a few kilometers, you feel that you have the entire desert to yourself. The run is almost meditative; runners are encouraged not to use an MP3 player and instead listen to the sound of the wind. While this was tough at first, after a while, we almost fell into a trance-like state. We began noticing things such as how our feet reacted as they sank into sand dunes or bounced off rocky terrain to how our skin tingled as we battled frigid temperatures in the morning to blistering 45 degrees in the afternoon. While many marathons have an abundance of stimuli, the Gobi Marathon gives runners an opportunity to focus just on their running.
The authors are Uma & Krishna Prasad Chigurupati
(This story was published in BW | Businessworld Issue Dated 20-10-2014)
Tags assigned to this article:
dell honeywell payu yahoo weather app ali raza