Food On The Go 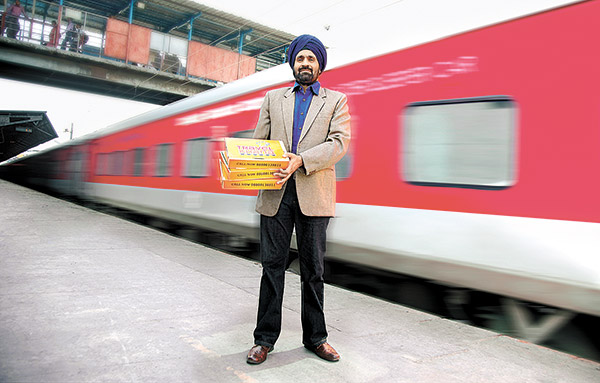 08 November, 2014
Print this article Font size -16+
It has, for the longest time, been the biggest question facing long-distance travellers on the Indian Railway network. Do you bring food from home, rely on what is dished out by the pantry car, or eat whatever’s available at stations, hoping you don’t end up with a Delhi belly? That dilemma has, to a large extent, been sorted out by a couple of entrepreneurs.

Delhi-based Pushpinder Singh, 42, after spending close to 15 years in the software and technology industry, set up Travelkhana — a marketplace that connects railway passengers with restaurants — in 2012. Around the same time, Kochi-based Arun Rajan, set up YatraChef. The models they follow are quite similar. The rail traveller can either dial the call centre or book food online by providing the passenger name record (PNR). When the train reaches the station specified, piping hot food is delivered from designated restaurants to travellers at their seats. Payment can either be made online or when the food is delivered.

Singh ran a pilot in end-2011 on the Ashram Express connecting Delhi and Ahmedabad. “We dropped close to 200 pamphlets offering food in Jaipur (a station between Delhi and Ahmedabad). Even before the train left Delhi, we had 5-6 orders,” says Singh, CEO, Travelkhana. That’s when Singh realised that he was literally on the gravy train. Services started formally in August 2012. As luck would have it, a few months later — December 2012 — Rajan suffered an upset stomach while travelling from Goa to Kochi. That’s when he started looking for food options on trains. Rajan, with co-founders Rameez Ashraf and Suchithra Sumadevi, started YatraChef in October 2013.

In a country as diverse as India, food habits change every 100-odd kilometres. But that’s not much trouble, as Singh has tied up with 400-odd restaurants in 130 towns across the country, while Rajan operates out of 124 towns. Besides variety, there is demand for special food. Rajan once provided Jain food to 600 people travelling on the Rajdhani Express. Says Rajan: “Around Navratri, demand for vegetarian food rises phenomenally.” The recent addition to the food offerings by Singh is a Vaishno Devi Yatra thali for Rs 140. He gets a 20 per cent margin. Says Padma Krishnan, a regular rail traveller: “I can now get the kind of food I want at the right price point.”
Getting food on to trains in time is a logistical nightmare. Travelkhana tracks the running information of trains to ensure that meals are delivered at the right time. What Singh discovered is that in most towns barring the metros, the key restaurants are usually located in a three-kilometre radius around the railway station. “That ensures that we can deliver on time, even when the train is late,” says Singh.

But the going was not easy. It took Singh four trips to Jaipur to sign on the first restaurant. “Today, as restaurants realise that we are opening up an entirely new business stream for them, it’s much easier to sign them up,” says Singh, who recently tied up with restaurants in Ludhiana and Jalandhar.

The other key issue was funding. In 2013, Duronto Technologies — the company that owns Travelkhana — secured an undisclosed amount in funding from Matteo Chiampo, former COO at Eko India Financial Services, and Palaash Ventures. Another individual investor is Google India’s managing director Rajan Anandan. YatraChef is currently looking for its first round of funding. “Currently, we are boot-strapped,” says Rajan.

Apart from funding, quality is a major issue in a service-industry business. It involves maintaining food quality, training restaurant personnel and logistics. While working on these, Travelkhana is also building its brand. The food, which was initially delivered in the packaging provided by restaurants, is now wrapped in packaging provided by Travelkhana. The entire operation is run by a 40-member team based in Delhi’s Preet Vihar. Rajan runs a lean ship with just 11 people.
Over time, Singh and Rajan have built a database of consumers and their food preferences. As repeat customers come in, it helps them get a fix on travel patterns of consumers, and thus plan accordingly.

This could well be the beginning of the change in how Indians eat while travelling. Singh is already diversifying. Travelkhana has joined hands with MakeMyTrip to offer food on buses. He expects to roll out the service, currently available only in Delhi and the National Capital Region,  across the country over the next few months.

Travellers can now place an order an hour before the train reaches a station. They can also cancel orders in case the train is running late. Singh points out that at times they have amended a lunch order to that for an early dinner when a trains is late.

While Singh caters to railway passengers and now to bus passengers as well, his original plan was to serve air travellers. He wanted to develop a tool to track flight status. That would allow users to book taxis and food on arrival. But he soon realised that the real potential lay in trains — with 3 million travellers a day, it works out to over a billion travellers a year.

As more and more railway travellers start getting hot food delivered on trains, Singh and Rajan can expect more gravy on their plate. After all, a satisfied customer will tell people around him. That could well drive the food business for travellers.