Folks, Are Ye Lovin’ It? 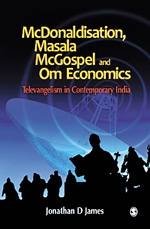 The rise and expansion of Christian evangelical programming on TV, and the responses it evokes from the Protestant Church and the Hindu community in India is James' focus in this admirable work.

Opening with an analysis of how televangelism has appropriated techniques of McDonaldisation - efficiency, control, predictability - James observes how TV has enabled the production of McGospel, the Gospel originating from the USA that incorporates the capitalist and corporate aspects of Christianity, while Hindu televangelism with its discourse orientation is far more commercialized. A full chapter is devoted to the history of Christianity in India, from the ancient times to the present, with details of the various denominations, demographics and regional trends.

The core chapters begin with the fourth, the analysis of Charismatic televangelism in India. James offers a detailed ethnographic study here, of the language, discourse style, fundraising, among others, of global (God TV, Miraclenet), local (Jeevan TV, Angel TV) and the glocal (hybrid productions like CBN's Solutions) programming.  Hindu televangelism, James notes, might have its roots in the televising of Ramayana. However, from the early 1990s and the rise of satellite television, we see an expansion of programming in general, and Hindu televangelism follows in the form of Aastha, the first such program on Indian TV. Practical aspects of a 'Hindu living', notes James, constitute about 55 per cent of the two main Hindu channels. James then compares Shankar's Art of Living with Benny Hinn's programmes to note that unlike Christian televangelism that is characterized by aggressive fundraising, Hindu televangelism relies more on the sales of products. There are similarities as well, where preachers are recorded during festivals and edited for telecast.

The influence of televangelism, especially of the American variety, has influenced the style of charismatic TV preaching in India, as James' empirical study documents. From his study it appears that 63 per cent of pastors have shifted their style of preaching from being merely expository to the 'prophetic' (134-5), while in other cases global televangelism helped them incorporate new songs. Senior pastors however expressed several concerns. Their first concern was that denominational loyalties might be threatened by these developments.  Many, in James' survey, also felt that certain 'liberal trends' - dancing during worship, lavish sets, the use of English, western style presentations - were inappropriate to India. Televangelism, James finds, must be cultural appropriate to India, and demands Indian comperes, local dress styles, and Indian styles of presentation.

There was, expectedly, a wide variety of responses from Hindu leaders to Christian televangelism, starting with a condemnation of the genre for what they see as the commercialisation of religion. Many Hindus and Muslims, discovers James, associate Christianity with the West. The middle class of Hindus might just be marginally more open to Christian television because of their emphases on prosperity and success, argues James.

James proposes that Christian televangelism in India is creating a new frame of interpretation, a new theology of communication, a new set of teaching and practices, a new type of clergy and a new liturgy. These new developments are, he concludes, necessitated and driven by globalization, where religion, culture and commerce are brought closer to each other, and there is an increasing commodification of religion and culture.

James' timely study makes for interesting reading. The ethnographic detailing adds a sense of weight, especially the numerous citations from interviews and audience profiles. The politics of television channels, the focused commercialism of televangelism - both Christian and Hindu - and the easy slide between religion and cultural indoctrination (of the 'Christianity is Western and anti-Hindu' kind) that James' work draws attention to make the book incisive and readable.