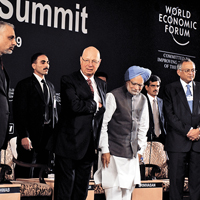 08 November, 2014
Print this article Font size -16+
First it was us president barack Obama's state visit, and now it is the India Economic Summit — a largely corporate gala jointly organised by the World Economic Forum and the Confederation of Indian Industry — that will bring the high and mighty of corporate India flocking to New Delhi's Taj Palace Hotel. In all, 784 chief executive officers and senior executives have signed up for the three-day event, from over 50 countries (in last year's edition there were 650). Not surprisingly, the mood is rather gung-ho, especially after the US President's ringing endorsement of Indian business.

"In the post-crisis world, confidence is picking up particularly in India. We expect further announcements by some of the international companies," says Sushant Palakurthi Rao, director and head Asia, World Economic Forum. Apart from the much-touted market at the bottom of the pyramid, organisers are focusing on how domestic and international decision-makers from business, government and civil society can implement national policies across states in both rural and urban areas to accelerate economic development, remove barriers to growth and increase social inclusion.

Then, there are the usual suspects: building critical infrastructure, expanding skills development, addressing security threats and achieving income and gender equality; let's not forget water crisis, healthcare, agriculture and de-stressing urban areas. That's more than enough material for the over 170 speakers (over three days, that's nearly 60 speakers a day, or at least six an hour!) at the event beginning 14 November. It is a dizzying array of topics and concerns, and promises to make for a heady experience.