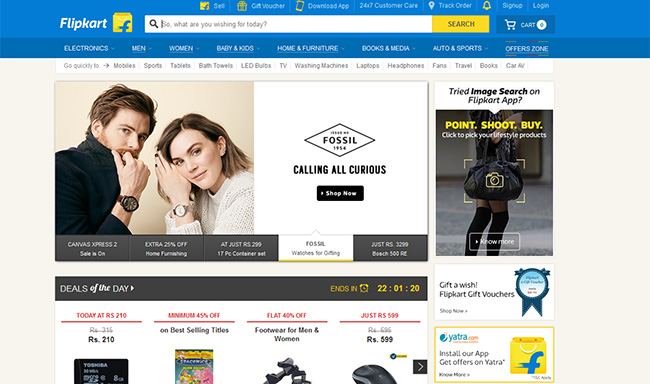 17 November, 2015
Print this article Font size -16+
This number, however, is not the real reflection of the revenues because market places work on a commission model. The actual revenues could be Rs 3,300 crore or there about. Even then it is close to the revenues of Shoppers Stop and Landmark.
The growth of Flipkart suggests that etailing is here to stay. However analysts believe that they also have to focus on profitability if they stop fund raising or if investors do not back them going forward. "Etailers needs to focus on building consumer stickiness away from the discounting model," says Harmninder Sahni, co-founder of Wazir Advisors.
The current business model is heavily dependent on winning consumers through discounts.
"In etailing only one or two companies will survive to be large companies. The industry is heavily dependent on investor money," says Mohandas Pai, MD of Aarin Capital.
Etailing is just 1.5 per cent of the total retail pie. The total market according to Ernst and Young is $550 billion and it is estimated to reach $1 trillion by 2022.
For etailers, 2016 will remain a crucial year because there may be a possible merger between PayTM and Snapdeal to take on Flipkart. Amazon on the other has committed large sums of money, $3 billion so far, to its Indian subsidiary Amazon India and is already beating Indian etailers in customer service and page views.

However, etailers in India are working with several industry leaders and venture capital funds to create a listing platform on the bourses. If the RBI and Sebi proposed startup policy finds common ground with the department of taxes then listing on the bourses will boost the confidence of home grown companies.

Currently, the tax department is contending the issue of Point of Effective Management (POEM), which relates to taxing funds that originate from global regions and have funded companies in India. With Flipkart proving to the industry that it can achieve high growth, it is only a matter of that an effective startup Act and listing norms will be out in a couple of months.
Tags assigned to this article:
flipkart future group reliance retail e-commerce etailers vishal krishna