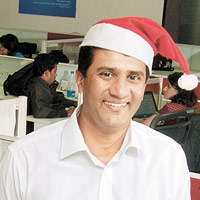 08 November, 2014
Print this article Font size -16+
The year 2013 promises to be full of surprises with everyone in the guessing game — what’s going to happen to Europe; will Italy, Greece and Spain get better; what about the new regime in China; how about the impending elections in Pakistan; where is the Modi versus Rahul debate headed… we can go on and on with these interesting and, at times, daunting possibilities.

Sitting with Santa Claus in his secret village at the North Pole, I asked him how he and his elves see the impact of these rapidly evolving global contradictions on a hitherto unnoticed, yet hugely relevant, group: the worker bee. How the world will be changing for the global workforce — in the way we all work, the way we all engage, and the way we all grow our companies.

A Flexible And Mobile Workforce
Santa took me to his 2013 workshop where all his elves were busy making toys and told me: my dear aam aadmi from India, see this… cubicles are gone for good and they are all sitting in an open office. This represents only 50 per cent of my elves, some 25 per cent are working from home today, and there’s a next-door workshop where the rest of my elves are working on contract and I know exactly how many toys they are making, by the minute. It’s a new integrated world making the best of a highly flexible, highly connected and highly mobile workforce. That’s the first big shift.

On Virtual Vehicles
Then he turned around and showed me an animated bunch of elves teaming up on what seemed like a new toy design, with lots of elves seen on screens, looking very real. Santa continued: these days, my folks get stressed out as the shelf life of the toys they make is fast shrinking, and every child wants newer and newer variants. We need to innovate continuously and my elves make all the difference, collaborating in ways where the real and virtual worlds seem to converge, where business combines with social life to exchange ideas and views. Thus the second trend: the new worker defines competitive advantage for companies in a world that is highly engaged and highly innovative, and uses social channels and virtual vehicles for engagement, motivation and entrepreneurship.

Age Of Instant Gratification
Santa then pointed out to a corner where a disillusioned elf was munching some popcorn. The aam aadmi in me was curious. Said Santa: he has just joined the workshop — the new generation workforce — and life has been very easy for him till now. I’m helping him transition to the work environment by giving him space for the stuff he has been used to. But watch out for the new generation. Their numbers are rapidly growing, you have got to recruit them and guide their attitudes. They can be real good, but more often than not, they want instant engagement, instant recognition, instant gratification, and they also switch off instantly, ha!

But they can be real fun if you keep them engaged. See there! Some of those new elves who are already through my induction programme produce some of my bestselling toys. Learn to manage them ‘in the moment’. That constitutes the third significant shift.

Work-Life Balance And Fun Fridays
It isn’t easy these days managing elves, continued Santa. Just give me a minute, I need to let an elf go home immediately. You know what, he has been in this workshop for the past three days — making toys, having food and sleeping here. His parents got worried about what was going on with him. I have been trying to convince him that work-life balance is important, that it is not the number of hours you spend in office that’s important but the number of productive hours, and that he should find the same amount of time for pursuing other life interests. But this elf just wouldn’t budge. I’m thinking of cutting down on some of the fun stuff in office and stopping the carrying forward of leave balances  so that some of these new elves won’t get hung up like that. They create a disturbing culture in my world of elves. It was never like this before at my North Pole workshops; did they learn this from India? Ha!

So are we talking of the shifting patterns to work-life balance and the overdose of fun-at-work concepts, and how we need to be more productive at work even while enjoying our lives outside? Absolutely right, said Santa. That’s an interesting fourth trend, indeed.

Information On Fingertips
Oh my gosh! There are too many insights for 2013, Santa! Let me rush back to tackle them... India is a long way off. Wait a minute! Santa said. Look at these dashboards, these are the latest ones. I have given each of my elves a board with ‘Big Data and Analytics On the Cloud’. They gauge their performance themselves within their teams; those red, amber and green flashlights give them a minute-by-minute account of how they are faring, and they correct themselves in real time. I’ll get involved only if the red stays on for long on any of them.

I was impressed. So it’s empowerment of the assembly lines, actionable information on fingertips, and management by exception as you increase the number of workers, and as they try to raise productivity and go non-linear. That’s right, concluded Santa.

Wish I could have stayed a bit longer with Santa, but 2013 promises to be too exciting for the ‘human’ in the human capital space in India for me to spend much more time at the North Pole. This year we are going to see a transformation in the way employees engage with their employers and contribute to their own growth and aspirations as well as that of their employers.

So here’s to this transformational journey of 2013, for a new maturing worker in India in ways more than one.

The author is country manager-India sales at Kronos Incorporated