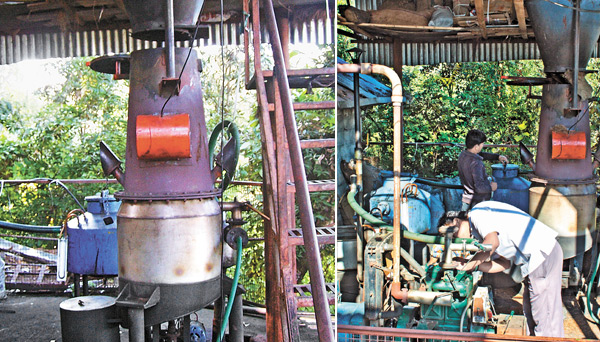 08 November, 2014
Print this article Font size -16+
If you are looking for a getaway in the Himalayan state of Uttarakhand, chances are that you may not take note of Berinag, a sleepy hill station, located about 102 km from Pithoragarh, the eponymous district headquarter town.

But if you are from the renewable energy sector, you may perhaps already be aware of both Berinag and Pithoragarh, thanks to Rajnish Jain and his Avani Bio Energy, which has developed the technology for producing electricity from pine needles, a biomass that is not just abundantly available in the state but also wreaks great devastation there because of its tendency to catch fire easily.

Today, a 9 kilowatt power plant fuelled by pine needles is in operation at the Avani campus at Berinag; the campus is not yet connected to the grid. The plant serves the captive needs of a textile unit run by the organisation, mainly running heat rollers, welding machines and a small mechanical workshop.

“We have applied for a patent on the technology which is pending,” says Jain, 52, and an MBA. In January, Jain will join the ranks of renewable energy entrepreneurs in the country such as Gyanesh Pandey of Husk Power Systems (HPS) when Avani will commission a 120 kilowatt plant connected to the grid in the district. HPS uses rice husk to fire small power plants in north Bihar villages that are not yet connected to the grid (BW tracked the journey of Pandey and HPS so far in its story The Rice Husk Power Experiment in its 14 May 2012 issue). Avani Bio Energy has already signed a power purchase agreement (PPA) with the Uttarakhand Power Corporation (UPCL) at a base price of Rs 3.70 a unit. The PPA stands valid for 20 years.

To start with, Jain and his wife Rashmi did not start Avani, a not-for-profit organisation, with the intention of providing electricity to villages in Pithoragarh. Unlike most of Bihar, villages in Uttarakhand, on average, get 12 hours of electricity from the grid now.
“We realised that pine needles were a big problem in this area as they cause a lot of fires. We stared exploring what we could do, looking at technologies which could harness the destructive energy,” says Jain, adding, “the initial idea was to use it for thermal energy (heating).”

In fact, Avani had begun operations by providing solar power systems (water heaters, lighting, driers) to villages which had very low grid connectivity then. Over the years, as more and more villages got connected to the grid, solar power systems are now used as a supplementary energy source. As of 2011-12, the state had a power deficit of just 305 million units (2.9 per cent) against a requirement of 10,513 million units.

The not-for-profit organisation also set up a textile unit to provide livelihood to women by making contemporary products using their traditional weaving styles. For this purpose, it brought in new colours, dyes, technology and design. The finished products are now marketed in other states of India and even abroad.

Jain’s preoccupation with pine needles came much later. He recalls meeting a couple of people who were trying to find some use for pine needles. “They were making charcoal from pine needles and briquetting it for use as cooking fuel but were using soil as a binder. It wasn’t a very practical solution,” he says.

It was at a conference on renewable energy, where someone spoke about using pine needles as a feedstock for gasifiers, that Jain got his inspiration for his current mission. But that was more than four years ago. It has been an arduous journey since.

The search for a workable solution to run a gasifier on pine needles took him to many more conferences on biomass technologies and research institutes, without much success. Jain recalls asking at a conference attended by representatives of Ankur Scientific, an organisation which had been working on the same lines: “My first question was how to run a gasifier on pine needles after which they asked me to send a sample and promised to call back. After not receiving any word from them for a month I called back. The representative told me that he hadn’t called me as he didn’t want to discourage me,” says Jain. Speaking to the Indian Institute of Science in Bangalore had proved equally unproductive.
While pine needles have a calorific value as high as the best quality wood, their low density makes it difficult to use them as a source of energy. Determined to come up with a solution, Jain began looking for ways to increase their density. “One day, I sat with a flour grinder and started grinding. After labouring for two hours, I had a kilo of ground pine needles with increased density,” says Jain.

Today, the power plant on the Avani campus uses pine needles in gasifiers after cutting them into fine pieces. It requires 1.2 kg of pine needles to generate one unit of electricity. The Avani innovation has won many business competitions, including Mahindra Rise where it was voted the second best idea. The initial seed capital requirement was met through an investment of Rs 6-7 lakh by Volkart, a Swiss foundation.
break-page-break
Looking For Scale
Jain, like others in the biomass energy space, is a lone man battling odds. A lot of lip service is paid to the biomass energy sector but very few individuals or state governments actually venture into it. Despite its huge forest cover, Uttarakhand has zero electricity coming from biomass-based projects.

“At present, we have no biomass-based projects and most of our renewable energy comprises of small hydroelectric power units,” says an official of the Uttarakhand Power Corporation  (UPCL).

Of late, however, efforts are being made to promote the use of biomass energy by the Centre. These include the establishment of the renewable compliance market, which requires distribution companies to increase the share of renewables in the energy mix.

“I am not venturing into other states as yet. Uttarakhand alone has a potential for up to 350 MW. For now, I am completely focused on getting my 120 kilowatt unit off the ground,” says Jain. He expects to break even in the next seven years.

Uttarakhand is one of the states that allows wheeling of electricity which makes it possible for power producers to sell their power directly to big industries like steel and cement. UPCL is bound to purchase 5 per cent of its total electricity consumption from renewable energy-based projects under the renewable purchase obligation (RPO).  “We are right now falling short of 100 million units of our RPO. With the commissioning of the Avani power plant, we hope to bridge some part of this gap,” says the UPCL official.

Should biomass-based power projects be feeding the grid than handling distribution themselves, as is the case with Pandey in Bihar? “Feeding the grid is easier in the sense that management pressure is much less. It is more predictable. It can even be less expensive compared to the situation where the grid has to be set up to distribute electricity. However, the downsides are that the rates offered by the state electricity boards are fairly limited and not very lucrative,” argues Pandey. Jain seems to have factored in the low rates as the PPA gives him “the right to ask for a revision in the price in case of an increase in our costs”.

Does Uttarakhand have enough raw material to meet the expansion planned by Avani Bio Energy? The state has around 3.43 lakh hectares of pine forests and they produce about 20.58 lakh tonnes of dry biomass annually.

Avani’s land is just enough to meet the requirements of its 9 kilowatt plant. For future requirements, Jain has already signed an agreement to use pine needles from the community forest land and is in the process of signing a similar agreement with the state forest department. The authorities charge a minimum of Rs 20 per tonne. “The forest department actually encourages the use of pine needles by the villagers in order to mitigate the destruction caused by pine needles,” says Jain.
Although pine trees shed needles only for four months in a year, they are enough to meet the requirements for the whole year, as the extra litter can be stored for use during the rest of the year.

“Every village has enough pine needles to run a 100-200 kilowatt power plant. This one plant can provide power to almost 1,200 rural families, or up to 10-12 villages. Also, the per capita consumption is quite low (about 100 watts) in hilly areas as they only use power for lighting purposes,” says Jain.

Avani Bio Energy is also taking care of last-mile connectivity. It is  laying lines to connect its power stations with a substation 3 km away so that there are no interruptions in supply. “We are looking at creating a bundle of 5-6 plants with the same supply line so that we don’t suffer any cost overruns,” says Jain. Avani also employs local people to collect pine needles and pays them Re 1 for every kg. This helps in providing livelihood to the locals, in keeping with the company’s social agenda.

Funding? No Problem
Jain is sure of finding enough funds to meet his expansion plans. Acumen Fund has provided $250,000 as the first round of funding. Additionally, Rs 35 lakh has come from winning various business competitions. Avani will look at raising another round of funding in late 2013. The capital required for setting up the next four plants of 100-120 kilowatt each will be around Rs 4 crore.

“We will be looking at various sources of funding. Part of the funding will also come in the form of subsidy from the Ministry of New and Renewable Energy. We have already received a letter of comfort from the government and have asked for a Letter of Intent. There is also a strong possibility that we will approach banks for part-funding given that we have all the necessary papers — PPA, LoI, etc.,” says Jain.

Jain believes a good scalable plan is the key to raising funds. Pandey, however, disagrees. “It’s not always enough to have a scalable plan to land good funding. People care more about the capability to execute and this is what the biggest challenge is. The ecosystem is still in a rather formative stage and, hence, there is rather limited availability of manpower, technology providers, etc.,” he says.

It does not seem as if such issues will worry Jain much. After all, he came to Kumaon in search of a meaningful life. “I did not move to Kumaon to be a social do-gooder; my wife and I did that for a very selfish reason — to have a meaningful life for ourselves,” says Jain, who hails from Haryana and spent three years at the Osho Ashram in Pune before setting off for Uttarakhand some 16 years ago.

“I was always trying to balance between having a regular life with a well-paying job and leading a more meaningful life. At last, my basic instinct won and the time I spent at the ashram further steeled my resolve to do that,” says Jain, who chose to settle down in Kumaon because it was part of Uttar Pradesh then, and other hilly states did not allow outsiders to buy land.