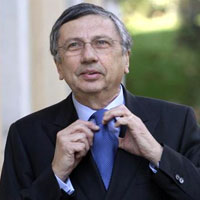 08 November, 2014
Print this article Font size -16+
Italian police arrested the head of Italian state-controlled defence group Finmeccanica SpA on Tuesday, 12 February, 2013,  in a corruption probe centred on the sale of helicopters to the Indian government, a judicial source said.

Finmeccanica Chief Executive and Chairman Giuseppe Orsi was arrested for alleged bribes paid to secure the sale of 12 AgustaWestland executive aircraft when he was head of the Finmeccanica helicopter unit, the source said.

India will take "suitable action" against Finmeccanica if graft allegations are proven true, a defence ministry official said, after the company's head was arrested in Italy in an investigation of the sale of helicopters to India.

"We will go to the root of the problem. If charges of bribery are proved, suitable action will be taken," said the official, who declined to be named because of the sensitivity of the matter.

The source added that under Indian defence procurement rules, companies involved in corruption can be punished with blacklisting and fines.

Highlighting the politial sensitivity of the case less than two weeks before elections, Prime Minister Mario Monti said the Italian government would deal with management issues at the company.

"There is a problem with the governance of Finmeccanica at the moment and we will face up to it," Monti told RAI state television.

In a brief statement, Finmeccanica expressed its support for Orsi and said it hoped his legal position could be clarified as soon as possible. Its business was operating as normal in the meantime, the company added.

The Italian business world has been shaken in recent weeks by a series of corruption cases, notably a derivatives scandal at Banca Monte dei Paschi and an alleged bribery case involving oil service group Saipem.

The latest series of scandals have become an issue in Italy's campaign for parliamentary elections to be held on February 24 to 25.

Northern League Backing
Orsi's appointment to lead the defence group in May 2011 was backed by the Northern League party, at the time an ally of then Prime Minister Silvio Berlusconi.

Centre-left politicians had called for Orsi to step down when he was first targeted in the corruption probe. Orsi, a long-serving defence industry executive, has denied wrongdoing.

Shares in the group fell 11 percent by 0846 GMT in Milan, while its rail technology unit Ansaldo STS was down 3.5 per cent after earlier being suspended because of losses.

The Indian foreign ministry said Italy had not shared details of the corruption probe into the helicopter sales. India's defence ministry said it could not immediately comment.

The first helicopters, for use by India's political leaders, were due to be delivered by December 2012 after a 560 million euro contract was awarded in 2010.

The source said three other people had been placed under house arrest as part of the probe, including the chief executive of AgustaWestland, Bruno Spagnolini.

Orsi, CEO at Finmeccanica since 2011, has been steering the loss-making company through a restructuring. Finmeccanica, around 30 per cent owned by the Italian state, has said it has always done business in India through official channels.