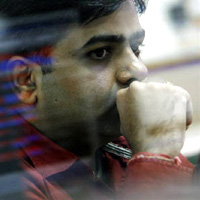 08 November, 2014
Print this article Font size -16+
Financial Technologies (India) Ltd's shares fall as much as 15 per cent after the company's announcement on Tuesday, 24 September that its auditor had said its audit of the company's fiscal 2013 results should not be relied upon.

Deloitte Haskins & Sells had told Financial Tech on Monday of its opinion about the company's financial statements for the year ended March 31, 2013, citing irregularities at a commodities exchange it runs.

On Tuesday, accounting regulator ICAI said it will look at the issues at Financial Technologies and its subsidiary National Spot Exchange Ltd (NSEL), which is grappling with a payment crisis.

The move comes against the backdrop of Financial Technologies India Ltd (FTIL) statutory auditor Deloitte Haskins & Sells withdrawing its report certifying accounts of the company for 2012-13 fiscal amid the Rs 5,500 crore payment crisis at the National Spot Exchange Ltd (NSEL).

A senior official of the Institute of Chartered Accountants of India (ICAI) said the regulator would look at the issues related to FTIL and the spot commodity exchange.

Specific details were not available.

Raising serious doubts on accounts of Jignesh Shah-led FTIL, Deloitte Haskins & Sells has withdrawn its audit report saying the financial statements for 2012-13 financial year cannot be "relied upon" any "longer" in the wake of NSEL payment crisis.

National Spot Exchange Ltd (NSEL), a firm owned by FTIL, has defaulted on six consecutive weekly payments to be made to its 13,000 investors.

"Due to the purported crisis at NSEL in the recent past and based on the communication of management of NSEL and the statutory auditor of NSEL on the financial statement of NSEL, the statutory auditors of the company on September 23 informed that the audit report dated May 30, 2013 on the standalone and the consolidated financial statements of the company for the year-ended March 31, 2013 should no longer be relied upon," FTIL said in a regulatory filing today.

The audited accounts were to be placed for FTIL's annual shareholder meeting on 25 September but the auditor redflagged the financial statements and withdrew its report.

In the filing, FTIL said that it has decided to defer the agenda item number 1,2 and 5 of the notice of Annual General meeting on September 25 to respect auditor's view and would satisfy the statutory auditors of the company on standalone financial accounts.

The standalone and consolidated financial statement has been audited prior to the event occured at NSEL, FTIL said.

The agenda number one was to consider and adopt the Audited Balance Sheet and the Profit & Loss Account for the year ended March 31, 2013 and rhe Reports of the Board of Directors? and Auditors? thereon.

The second agenda was to ratify the payment of interim dividend and to declare a final dividend on equity shares, while the fifth one was to re-appoint Deloitte Haskins & Sells, Chartered Accountants (ICAI Registration No. 117366W), as the statutory auditors of the company.

NSEL has engulfed into a crisis after it stopped trading of all its contracts on July 31 following the government's direction.