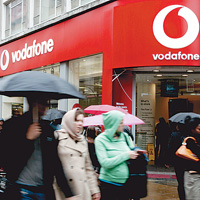 08 November, 2014
Print this article Font size -16+
The Revenue department will soon send a reply to Vodafone over the representation received from the company on its rejoinder notice asking the British firm to clear the tax dues, estimated at around Rs 11,200 crore.
"We will be replying to Vodafone's reply to our reminder in a day or two," a senior finance ministry official said.
The Department had recently sent a tax reminder notice to the British telecom major.
It relates to capital gains tax arising from the sale of telecom business by Hong Kong-based Hutchison Whampoa that involved Indian assets to Vodafone in 2007. The reminder did not include any deadline for payment of the tax.
However, Vodafone in its reply to the reminder said that no tax is payable.
"Vodafone has replied to this reminder, stating that it continues to believe that no tax is payable on the above transaction," the British firm had said.
The Income Tax Department on October 22, 2010 passed an order determining a tax liability (including interest) of Rs 11,218 crore on Vodafone for the deal which took place in Cayman Islands in 2007.
The Supreme Court, however, quashed the order in January 2012. After the apex court's ruling, the Income Tax Act was amended with retrospective effect to bring into the tax net such overseas merger and acquisition deals that involve Indian assets.
Section 119 of the Finance Act, 2012, seeks to validate the October 2010 order of the Income Tax department. The department had also passed an order imposing a penalty of Rs 7,900 crore on Vodafone in April, 2011.