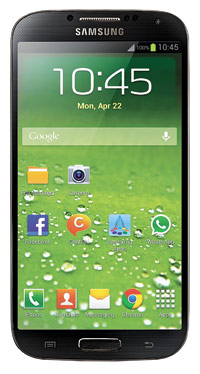 08 November, 2014
Print this article Font size -16+
Being top-dog is not easy. The more you succeed, the more is expected of you. As Samsung got ready to roll out its fourth gen smartphone in the bestselling Galaxy S series, the tech savvy wanted the game changer they’ve come to expect every time. Well, a revolution the S4 is not. But it’s done two things with the S4: improved it hugely over its predecessor, and set some new directions in software. What Samsung has not done is to change the design and plastic and so, the S4 arrives with the same look (somewhat nuanced) that one is getting tired of now. The plastic panel is glossier, picking up prints in seconds, and also making the phone rather slippery. This can be easily remedied with a case or replaced back panel, but ever since other manufacturers showed that plastic can look premium, tolerance for Samsung’s take on the material has gone down.
But let the plastic protest not blind anyone to the fact that the S4, now packing more in a body barely 0.2 inches more than the S3, is a powerful piece of kit. Beautiful screens or great functionality make me forget about the outsides of a phone and as I turn on the S4’s screen, there’s no doubt that I’m looking at a superb phone. The screen, which takes up more space on the device because of narrowed side bezels, shows crisp text and clear images at great viewing angles and with vibrant colours. There are many settings you can try out to adjust the display to your liking, including its touch sensitivity. Navigating across the phone is feather light and super smooth, as can only be expected from a device that has an Octa-core processor, a powerful graphics chip  and enough RAM to power it all. The S4 shoots through benchmarks, so there’s little point dwelling on its specs. The phone does need all the power it can get because what Samsung has planned for it is a comprehensive fit into its user’s life, making it the one device to depend on for practically everything. Their marketing positions it as your life partner, which I suppose phones are getting to be these days.
The S4 works with the newest version of Android Jelly Bean — that’s 4.2.2 — and Samsung’s user interface, TouchWiz is refreshed and sitting solidly on top of the operating system. People either like or hate TouchWiz, incidentally. I tend to make my peace with it because I’m a bit of a feature creature. The number of features — countless — on the S4 is another source of annoyance for many reviewers. I have mixed feelings about that because they’re not in the way.
Explore, use, keep it if you like or turn it off if you don’t. But how can features ever be too many? They may not work well, or work for you, and that can be a problem but since they’re easily switched off, I don’t feel there’s cause for complaint. The features centre a lot on gestures and use the phone's sensors (it has two more than other phones). Take Smart Pause for instance.

Watch a video and look away — the video will pause. I found this worked one way with me and didn’t resume the video when I looked back. I also found it annoying as I don’t really want it to pause even if I look to the side for half a second. On the other hand, the Air View feature amuses me as I quite like pointing a finger say, at an album, and taking a peek at what’s inside without touching the device. Or flipping through pictures with a gentle wave of the fingers. It feels luxurious.  As long as you’re not intimidated by the mere presence of features, try them out at leisure and enjoy the discovery. The S4 retails for Rs 41,500.
Galaxy S4 Vs HTC One
These days no one mentions the Galaxy S4 without mentioning the HTC One. The primary reason
for this is that the One is the absolute antithesis of the S4’s design. It has the straighter lines people seem to like. Rather in the style of the iPhone 5 and the BlackBerry Z10. More than that, it’s the build and material — all glass and metal — that is greatly admired. HTC has practically crafted the One, detailing the design with each curve and button so that it feels fantastic to look at and hold. That’s what the S4 is missing. Samsung’s TouchWiz is as heavy on the OS as the HTC One’s Sense 5 UI is light. That’s one reason tech-savvy people like — they feel closer to the stock Android experience and are happy to customise the rest to suit themselves. The trade off is that you don’t get the Samsung-style new features. What HTC One has is the BlinkFeed, which is a home screen scroll of your news and social feeds, making the phone both look good and be useful at keeping boredom away. Both phones are fast and high-end performers and the processors should not be a reason to choose one over the other. The screens of the two devices are both fantastic, but different. The HTC One’s screen has more realistic colours and a high pixel density while the Galaxy S4’s has vibrance, rich colour and contrasts.
The S4 has a 13MP camera with several camera tricks such as being able to shoot a picture with your own photo inserted using the 2MP front camera. The HT One has a unique 4MP camera which may sound starting but isn’t when you realise the pixels are bigger, letting in more light for low light photos. It also has a nice feature to set photos to a tiny video — with music, which sounds rather nice on the HTC One.