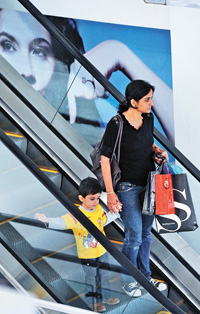 
SSL also enjoys a low debt-equity ratio of 0.69 and an interest cover of 10.51 times (that is, it has sufficient cash to pay interest on debt). It also has a healthy debt service coverage ratio (DSCR) of 1.63 (that is, there is enough cash to run the business after paying off interest and debts). If the DSCR falls below 1, a company has to dip into promoter funds to pay off debts.

The Counter's Open
SSL is now back in the black and Shrikhande wants to ensure that it stays there. He has built a strong analytics team, which helps make sense of the data collected from stores. The data is used to predict customer behaviour and select merchandise accordingly. It also helps the company tell brands the kind of merchandise they ought to stock with SSL. This lowers inventory costs and increases margins.

The company also has a revenue-share agreement with brands where they work on a shop-in-shop model, within the store. The inventory risk is shared and SSL benefits from increased revenue if the brand creates enough churn. For example, says 42-year-old customer Bandana Narwal, a self-confessed SSL fan: "Shoppers Stop has more international brands that connect with my work profile and lifestyle."

The company's loyalty programme, First Citizen, has over 2.5 million members and analysing their buying patterns helps promote sales. "This allows us to plan our offers and discounts, and target consumers better since 80 per cent of our sales happen because of the loyalty programme," says Vinay Bhatia, vice-president of marketing.

break-page-break
SSL, which has over 700,000 fans on Facebook, uses the social networking site to promote new styles. In fact, it even has plans of making a mobile app, though that is still some time away.

An area in which SSL lags and which Shrikhande is now concentrating on is private labels. At present, private labels form only 25 per cent of SSL's total sales, compared to over 80 per cent for Pantaloon, Trent and Lifestyle.

Devangshu Dutta, CEO of retail consultancy Third Eyesight, maintains that private labels should form a large part of the offering as their margins are at least 60 per cent of the retail price. They also attract more customers. "I shop a lot at SSL, but I prefer Lifestyle because of their private labels, which fit my monthly budget of Rs 3,000," says Rekha Sebastian, a 23-year-old MBA graduate who has recently begun work in an HR company in Chennai.

Starting Something New
While Nagesh's strategy was to go slow, Shrikhande is in a hurry. The total number of SSL stores has risen from 24 in 2008 to 38, with six added in 2010-11 itself. SSL now controls 2.3 million sq. ft of retail space, up from 1.3 million sq. ft just three years ago. What's more, in the next 30 months, SSL plans to take the total number of stores to 60, covering over 3.6 million sq. ft, with an investment of Rs 442 crore, most of which will come from internal accruals.


Of course, competitors, too, are expanding. Lifestyle plans to have 58 stores in three years, from 28 now. Pantaloon, too, is gunning for a similar number, up from 50 stores. In terms of size, Pantaloon has about 15 million sq. ft now, SSL 2.5 million sq. ft and Trent Westside about 2 million sq. ft. The companies plan to spend about Rs 500 crore each over the next five years on expansion.

At stake is the Rs 60,000-crore organised apparel market. The size of the entire Indian retail industry, say experts, is $400 billion. According to EY, organised retail is about 6 per cent of this pie, of which apparel retailers make up 50 per cent. "I expect organised retailing to be around 10-12 per cent in five years. Our business opportunity is growing within this pie," says Shrikhande.

Although investment and the store count for SSL is similar to its competition's, execution plans are different. While retailers such as Pantaloon and Lifestyle are increasingly focusing on Tier-2 towns, SSL aims to stick to the top eight or 10 cities including Pune, Bangalore, Hyderabad and the four metro cities. "We will open in Tier-2 cities, but since 75 per cent of the sales come from metros and Tier-1 cities, we have decided to increase our presence here," says Shrikhande. SSL will open nearly 80 per cent of the new stores in the top 24 cities.

"Our target customer is a family; we are building business around them," says Shrikhande. On the cards is expansion of its hypermarket format, Hypercity, which has nine stores now and is yet to break even. The company operates large format stores (55,000-100,000 sq. ft). SSL will use most of its internal accruals to open 17 more such stores over the next two years at an investment of Rs 100 crore. The number of Crossword bookstores is likely to increase from 65 to 110 in three years, and that for Mac — a high-end cosmetics joint venture with Estee Lauder — from 17 to 30 by 2014.

One part of the plan is also to expand its cash-guzzler, Home Stop, a home décor store on the lines of Pantaloon's Home Town, to six stores. In 2009, when there were only four Home Stop stores, expansion was put on hold. "Furniture retailing slowed down two years ago, but we see it picking up again," says Shrikhande. The company plans to invest Rs 60 crore on this.

Over the past few years, SSL has moved into speciality retailing also. Today, it has 25 Mothercare stores, a maternity and infant care store that started out as an exclusive franchise agreement with Mothercare UK. It has also made a foray into airport retailing and runs duty-free stores at the Bangalore international airport under a joint venture with the Nuance Group. The company is even looking at the entertainment sector and has bought 45 per cent stake in an entertainment and gaming outfit called TimeZone.

Shrikhande sure has his hands full.