Feel Pained At Attack On Husband, Will Fight Back: Priyanka 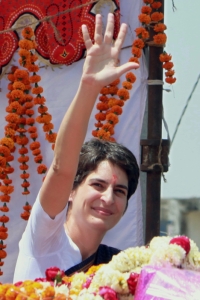 08 November, 2014
Print this article Font size -16+
Breaking her silence, a "pained" Priyanka Gandhi on Tuesday (22 April) said her husband Robert Vadra was being targeted for political reasons and asserted that her resolve to fight back will increase the more the opponents attack.

Campaigning for her mother and Congress President Sonia Gandhi in this constituency of Uttar Pradesh, she said Vadra was being attacked by BJP to divert the attention of people from the development issues to "meaningless talk" and that the "truth" about her husband will prevail.

"I am pained that while this election should have been contested on development, needs of the people, employment for youth....instead, an attempt is being made to mislead you towards meaningless talk," she said.

Later, she told reporters, "There has been a political attack on my family. They have used my husband for political attack. It has been going on for two years and I feel very strongly about it."

"There has been a political attack on my family. They have used my husband for political attack. It has gone for two years and I feel very strongly about it," she told reporters.

Invoking Indira Gandhi, Priyanka said she had learnt from her grand mother how to fight back as "truth is like a shield".

Deploring the politics of divisiveness, Priyanka said India was known for its tolerance since it is the land of Buddha and Mahatama Gandhi.

The country has accepted her mother Sonia, who was not born here, but now attempts are being made to inject "poison", she said.

"Do you want a country of the Buddha, of Mahatama Gandhi where hindus, muslims, sikhs and christians live together or a country where you fight one another and one community is taken forward while another is left behind and division is created in terms of caste and religion," she asked those present at the public meeting, apparently attacking BJP and its leader Narendra Modi.

She said she was confident that people of the constituency would vote for Sonia as she had always fought for them, which they are "aware of".

Priyanka said she was sure that peope would do so not just beacuse they were connected with her family but because they knew of her work.

"My mother has always been with you through your struggles and you too have been with her through her struggles," she told the gathering.

"The affection we get from you is sufficient..I believe that you (people) will support Soniaji, but I want that you vote for the country," she said.

Priyanka said that Sonia has ensured development of Rae Bareli and this would continue in the same manner.