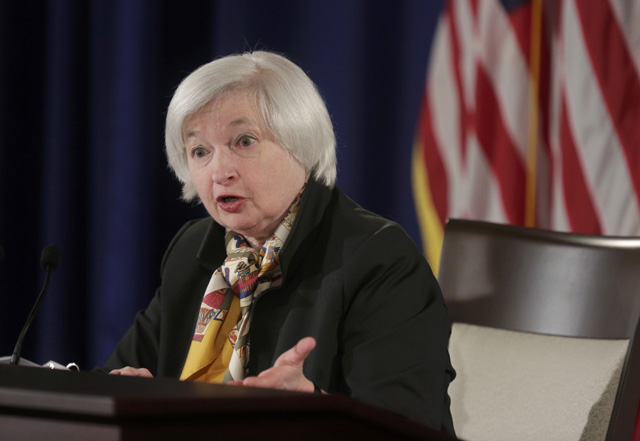 31 March, 2015
Print this article Font size -16+
The Federal Reserve on Wednesday moved a step closer to hiking rates for the first time since 2006, but downgraded its economic growth and inflation projections, signalling it is in no rush to push borrowing costs to more normal levels.

The U.S. central bank removed a reference to being "patient" on rates from its policy statement, opening the door wider for a hike in the next couple of months while sounding a cautious note on the health of the economic recovery.

Fed officials also slashed their median estimate for the federal funds rate - the key overnight lending rate - to 0.625 percent for the end of 2015 from the 1.125 percent estimate in December.

The cut to the so-called "dot plot," together with other economic concerns cited by the Fed, sent a more dovish message than investors were expecting, and pushed market bets on the central bank's rate "lift-off" from mid-year to the fall.

"Just because we removed the word 'patient' from the statement doesn't mean we're going to be impatient," Fed Chair Janet Yellen said in a press conference after Wednesday's statement.

Stocks on Wall Street surged and oil prices jumped as much as 5 percent after the Fed statement. The dollar tumbled against other major currencies and the U.S. 10-year Treasury yield dipped below 2 percent for the first time since March 2.

In its quarterly summary of economic projections, the Fed cut its inflation outlook for 2015 and reduced expected U.S. economic growth. The policy statement repeated its concern that inflation measures were running below expectations, weighed down in part by falling energy prices.

"I just don't see any price or wage pressure out there," said Craig Dismuke, chief economist for Vining Sparks. "June is not off the table but it's unlikely. September is the most likely time for the first rate hike. They might get one hike in this year, maybe two."

The Fed noted that a rate increase remained "unlikely" at its April meeting and said its change in rate guidance did not mean it has decided on the timing for a rate hike. Yellen told reporters that a June move could not be ruled out.

The Fed statement, however, allowed enough flexibility for the central bank to move later in the year, stressing that any decision would depend on incoming data.

"The committee anticipates that it will be appropriate to raise the target range for the federal funds rate when it has seen further improvement in the labour market and is reasonably confident that inflation will move back to its 2 percent objective over the medium-term," the Fed said.

It had previously said it would be patient in considering when to bring monetary policy back to normal.

Goldman Sachs economist Jan Hatzius said in a research note that the Fed's statement and projections suggested a hike in September rather than June, citing the "dot plot" shift and changes to the central bank's assessment of the economy.

Muddy Data
Yellen has kept rates at near zero since taking over as head of the central bank in February, 2014, though she has also overseen a steady whittling of loose money promises.

And while she lays the ground for "lift-off," the Fed continues to grapple with muddy economic data: strong job creation, continued growth, and healthy consumer demand in the United States, but a global collapse in oil prices and a rapid run-up in the dollar that could mean the Fed remains far from its 2 percent inflation target.

Economists and investors were watching closely for the Fed to drop "patient" from its rate guidance language, as a sign that the central bank will shift towards making rate decisions on a meeting-by-meeting basis.

"Let me emphasise again, that today's modification of the forward guidance should not be read as indicating that the committee has decided on the timing of the initial increase in the target range for the federal funds rate," Yellen said in the press conference.

"In particular, this change does not mean that an increase will necessarily occur in June. Although we can't rule that out."

The federal funds rate has been at its low point since December of 2008. The last time the Fed raised rates was in June 2006, when a roaring housing market and strong economic growth prompted it to push its target rate to 5.25 percent.

There were no dissents on the Fed statement.
(Reuters)
Tags assigned to this article:
economy news 7 world us fed economic outlook fed rate