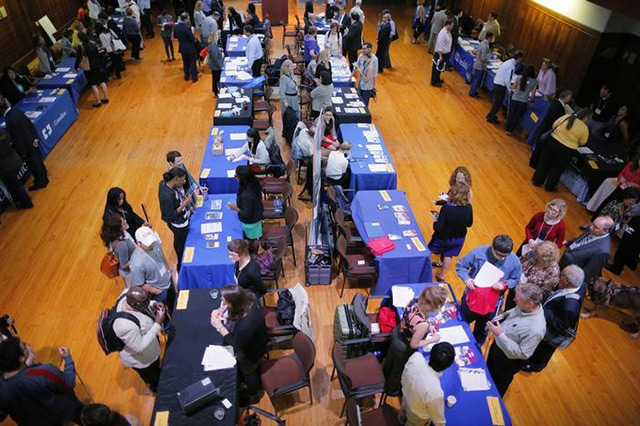 17 June, 2015
Print this article Font size -16+
The US Federal Reserve is meeting with the possibility of an interest rate hike squarely on the table, but with a different issue center stage: Is the worst of 2015 over?

After watching the US economy contract in the first quarter, central bank officials have signaled they won't raise rates this week. But they will have to judge whether healthier recent jobs, wage and consumer spending data have put that earlier swoon safely in the past, clearing the way for a rate hike - or hikes - later this year.

The Federal Open Market Committee's policy statement, due to be released at 2 p.m. EDT (1800 GMT) on Wednesday, will spell out how policymakers feel the economy has progressed since their last meeting in April, and particularly whether the labor market continues to strengthen.

But just as important will be the release of policymakers' individual economic projections, which will strongly hint at whether the Fed intends to hike rates only once this year, or twice - a critical point for markets and others trying to assess the shift to a new "regime" of rising rates.

"The signal from the June ... meeting will be especially important," Goldman Sachs economist Kris Dawseywrote this week, with an "overarching message" that rates will start rising in September, and are likely to rise again by the end of the year.

The meeting will be the first since the depths of the 2007-2009 financial crisis in which the outcome is not constrained by "forward guidance," the open-ended commitment to keep rates low to counter the worst downturn since the Great Depression.

Keen to avoid disrupting global markets as they engineer the first U.S. rate increase in nearly a decade, Fed officials have said they plan to broadcast their intentions as clearly as possible without making promises.

On that score, a June rate hike is almost certainly a non-starter, with Yellen going no further than to say the rate "liftoff" is likely sometime this year and other central bank officials sounding a cautious note about the risks still facing the U.S. economy.

But the stronger recent data makes a September rate hike "very, very likely," Northern Trust chief economist Carl Tannenbaum said. "The real challenge the group is going to have is starting a program which over three months will soften the earth" for a rate rise, he said.

Mind The Dots
With the FOMC statement whittled down to five paragraphs and shorn of all of its crisis-era language, Wednesday's meeting may put even greater weight on the individual forecasts and the related "dots" - the estimate each Fed official will provide of where they think the central bank's target interest rate will be at the end of the year.

Those projections, however, are anonymous estimates by 17 policymakers using 17 sets of assumptions to determine where they think rates should be at a particular time. That makes the dots not so much a forecast of where rates will be but more an expression of each policymaker's personal conviction about the right policy path.

To some, that's a weak basis for assessing where the Fed stands.

"It's just a very poor communication tool by modern central bank standards," Bank of America economist Ethan Harris said. "They all have different assumptions and they're all inherently inconsistent. It's a hodgepodge of numbers."

But in the absence of a common forecast, the dots are among the main sources of policy information the Fed produces.

As of April, the median projection for the fed funds rate stood at 0.625 percent, a level that implies two quarter-point rate increases by the end of the year. If that median is left unchanged when the fresh forecasts are released on Wednesday, the Fed would have four more meetings this year to raise rates twice - likely fixing September as the liftoff date.

If the median remains at 0.625 percent, "it would be a fairly clear signal the Fed has a strong presumption that rates will go up in September," analysts at Cornerstone Macro wrote in a preview of the FOMC meeting.

Investors continue to take a slightly less aggressive view of the Fed's intentions. According to an analysis of fed funds futures contracts by the CME Group, liftoff is now anticipated in December, though October is a near 50-50 bet.