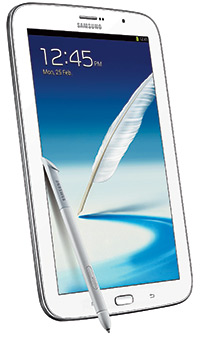 08 November, 2014
Print this article Font size -16+
Trust Samsung to cover every size of tablet from here to eternity. Between the 5-inch phablets and the 10.1-inch tablet, they have it all, and you can pick whatever size suits you and stop complaining already. Of course, not every tablet has the S-Pen. That’s reserved for the Note series, of which this 8-inch tablet is one — known as the Galaxy Note 510, or 8.0 or GT-N5100, if you’re not confused enough.
Some people think of the Note 510 as an enormous phone because it does have calling ability and has the familiar design of the Galaxy smartphones. But it’s quite clearly a tablet and one that could be a good option for those who want portability and a device that’s usable at work. Or it would have been had it not cost a whopping Rs 30,900. One can’t help but consider the iPad Mini, which starts at around Rs 21,000, the Nexus 7 which is around Rs 15,000 to 18,000, though availability is sporadic, and the Asus FonePad which is for Rs 15,999. There are also many low-cost 7-inch tablets to choose from. The price of the Note 510 may well go down in time though. If you’re considering other Android devices, look for storage equivalents and the presence of 3G.
So what does the Note 510 have going for it? Rather a lot, actually. The S-Pen stylus works very smoothly and sensitively and because you can switch between typing and writing, you can use it in many situations, especially at work. People make much of the “pure” Android experience offered by the Nexus 7, but that’s something mostly the tech-inclined will be able to enjoy, not someone who can’t be bothered tweaking and customising and hunting for apps. That’s where the Note scores: it’s got everything ready to go and if you just want to get some work done and then read, browse and play around, this is a great device. Right from the start, the Note 510 leads you by the hand on setting up your device. Then, all you have to do is slide out the S-Pen and as the home screen zips to the note-taking app, you’re ready to go. The pen works with fabulous smoothness, just as it does on the Note 2, though it’s slightly differently sized. You can get office apps like Documents To Go and Kingsoft Office, even equip yourself with a portable keyboard, and you’re in business. To kick back and relax, read (the tablet has a dedicated Reader mode) or flip through Flipboard, play a game or two, etc.
What the Note 510 does not have going for it is its build when compared to other tablets. Many of those may be plastic too, but the feeling of Samsung’s glossy material just doesn’t feel as premium as its price does. On the other hand, tablets like this one need to go into a case , especially if they are to be carried around in a handbag and also because the back is a bit slippery and safer off in a case.
Another thing the Note 510 doesn’t have going for it is a stunning screen. While it’s pleasant enough and has great colours, viewing angles and contrasts, they should have notched it up a bit.

Still, you only miss a better screen if you’re already used to one, and certainly not if this is your first large smart device. The cameras are average, as they tend to be on tablets of this category.
No matter what resolution and density, there’s no doubt the screen works well and is sensitive and responsive. All the special Samsung features such as the Air View, the Multi screen, Smart Stay, etc. also work on the Note 510 and may even see an update in the future. It’s a handy and functional device with the 8-inch size giving the user enough screen real estate to work while remaining easy to hold and carry. Compared with the iPad Mini, you don’t get the amazing universe of quality apps that are on the App Store. But on the other hand, you do get Google’s increasingly compelling services and you have what is needed to supplement your work — which I suppose is one good reason why it’s called the Note in the first place.
Micromax Canvas A115
How does one argue with a price of Rs 9,999 for a big solid Android smartphone. That too when it works just fine. It’s difficult, and Micromax knows it. They’re confidently expanding their Canvas line with variants, each of which specialises in something. In the case of the Canvas A115, it’s 3D.
Who really wants 3D, is another matter. I would relegate 3D on phones to the realm of gimmickry: but there are bound to be gaming and movie enthusiasts who would consider 3D a major benefit.
The A115 has a stereoscopic 480 x 800 display which does fine on colours and 5-point sensitivity but not so good on viewing angles and brightness. But it does allow you to see pictures, video, games and even 3D wallpapers in 3D. You can see added depth without having to use glasses. You can create 3D content but the camera is just an average 5MP primary and 0.3MP rear facing.
The Canvas 3D doesn’t do so well on specs. It has a Microtek 1GHz dual core processor running on Android 4.1.2 with just about 512MB RAM and 4GB internal space, about 1GB of which is available. There’s a microSD slot and this is a dual-sim phone. It’s loud and clear and has pretty good sound. On benchmark tests, the Canvas 3D isn’t that impressive and is beaten hollow by its predecessor, the Canvas HD, so if you’re not a 3D fanatic, the HD is a better performer.
It’s a bit heavier and bulkier than some of the others in the five-inch brigade. Forget about any sort of one-handed use unless you find some special keyboard apps for that. It looks a bit Samsung-like on the front and HTC-like on the back.  The battery, which you can get at by removing the back panel, is a 2,000 mAh Li-Ion and it’s an average performer.