Amid the ongoing tussle between the farmers and the Centre over newly-enacted three farm laws, former India all-rounder Yuvraj Singh on Thursday said he is "confident" that a peaceful resolution will be reached soon.

"As proud citizens of our beloved India, let's stand united in this hour of crisis. There is no problem that cannot be resolved. Our farmer community is the lifeblood of this nation and I am confident that a peaceful resolution will be reached soon #IndiaTogether," Yuvraj tweeted. 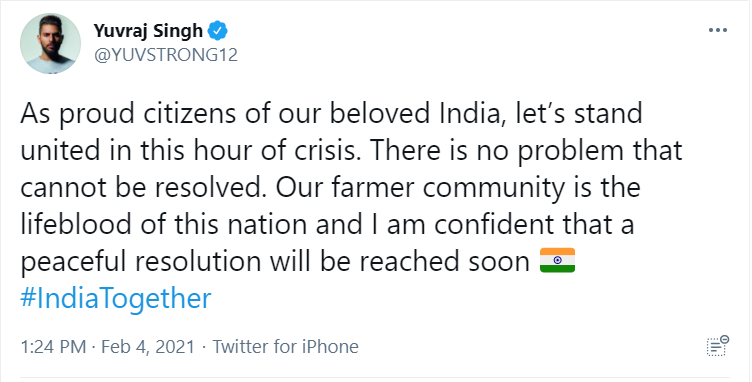 On Tuesday, Rihanna took to Twitter to share a news story by CNN on the internet shutdown in several districts of Delhi's neighbouring state Haryana after protestors broke barricades to enter New Delhi and clashed with police in several parts of the national capital during the January 26 'tractor rally' protest organised by farmers.

The Ministry of External Affairs, in its statement had said that the government has passed the laws "after a full debate and discussion" and has "initiated a series of talks" to address the farmers' issues. The statement also condemned the violence that broke out during the protests on Republic Day.

"The temptation of sensationalist social media hashtags and comments, especially when resorted to by celebrities and others, is neither accurate nor responsible," the statement read alongside hashtags #IndiaTogether and #IndiaAgainstPropaganda.
Farmers have been protesting on the different borders of the national capital since November 26 last year against the three newly enacted farm laws: Farmers' Produce Trade and Commerce (Promotion and Facilitation) Act, 2020; the Farmers Empowerment and Protection) Agreement on Price Assurance and farm Services Act 2020 and the Essential Commodities (Amendment) Act, 2020. (ANI)