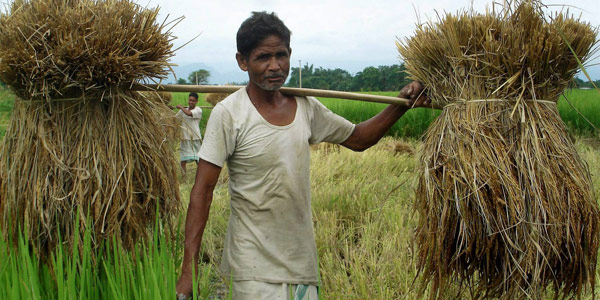 08 November, 2014
Print this article Font size -16+
Unseasonal rains and hailstorms this month have damaged the winter-sown crops of millions of Indian farmers, but Rekha Garole lost more than others.

Her 42-year-old husband Santuka killed himself this month after hail devastated the wheat and chickpea crops that they had been counting on to repay a bank loan of Rs 90,000.

"He committed suicide to escape his debt burden," says Rekha, who met nearly a dozen political leaders in a week at her mud house in the Nanded district of Maharashtra but has yet to receive any financial aid.

Santuka, like other farmers in his village of Golegaon, prayed last year for bountiful rains to end two years of drought in the region.

Ample rainfall did come, but at the wrong time. In September, cloudbursts damaged soybean and sorghum crops that were ready to be harvested, forcing farmers like Santuka into debts that they could not pay due to the latest crop damage.

Millions of small farmers are struggling to survive as erratic weather hits their only source of income. They are seeking government help to stay afloat until the next harvest, but bureaucrats are moving slowly to record crop losses.

Anger is mounting among affected farmers tired of hearing empty promises. Many have given up hope.

This could spell trouble for the ruling Congress in a five-week general election that starts on April 7, as the farmers' vote helped it retain power in 2009. Opinion polls suggest that Congress faces a heavy defeat.

"It will make the government more unpopular just before the elections," said Jaidev Dole, a political analyst based in the city of Aurangabad in Maharashtra.

"The farmers affected are unhappy with the government's response, and that can be reflected in votes. Opposition parties have already started to make this an election issue."

In Madhya Pradesh and Maharashtra, nearly 3 million hectares of crops have been hit, Agriculture Minister Sharad Pawar said. Crops have been damaged in Rajasthan and Punjab and in Karnataka and Andhra Pradesh to a lesser extent.

Orange, grape and mango farmers were the worst hit by the storms, along with wheat, rapeseed, chickpea and red gram.

The damage could force the government to slash production estimates for key winter-sown crops like rapeseed, chickpea and wheat, but the immediate worry would be vegetable supplies.

Prices Rise Again
After moderating in recent weeks, vegetable prices have started to rise again as supplies have been disrupted by the rains. Double-digit food inflation contributed to the Congress' defeat in key state elections last year.

Opposition parties, mainly the Bharatiya Janata Party (BJP) that is favourite to form the next government, are already cornering the government over farmer suicides and price rises.

Campaigning in the hail-hit areas, the BJP's candidate for prime minister, Narendra Modi, said: "Despite India being an agrarian economy, the government's wrong policies are forcing farmers to commit suicide."

The central government will provide Rs 1350 Crore to farmers hit by the precipitation in Maharashtra and Madhya Pradesh, a government source said on Thursday.

Farmers' leaders say the aid is too little even to cover the cost of seeds and fertilisers.

"Farmers have taken loans from banks and private money lenders. With government help of a few thousand rupees, they can't even repay their debts," said Vijay Jawandhia, a farmers' leader from Maharashtra.

Any financial help comes too late for Rekha, who has two school-age children: "After a suicide everyone makes promises," she told Reuters by phone. "But the ones who commit suicide will never return."