Patna (Bihar) [India], September 25 (ANI): Raising objections against the Centre's passage of farm Bills in the Parliament, Rashtriya Janata Dal (RJD) leader Tejashwi Yadav on Friday said that these Bills are "anti-farmers" and added that it will make them "poorer".
These statements from Bihar former deputy Chief Minister came while participating in a tractor rally protest in Patna.
"The Centre has made our 'anndaata' (farmers) a puppet through its 'fund daata'. The farm Bills are anti-farmer and have left them dejected. The government had said that they will double the farmer's income by 2022 but these Bills will make them poorer," he said while speaking to media.
"The agriculture sector has been corporatised," Yadav added.
It is worth noticing that Tejashwi Yadav on Thursday asked supporters to hit the roads in each of 38 districts headquarters of Bihar and register strong protests against the Bills.
In the morning, some of the RJD workers rode buffaloes in Darbhanga to mark their protest against the farm bills. They were sloganeering and have also brought tractors to mark their protest. 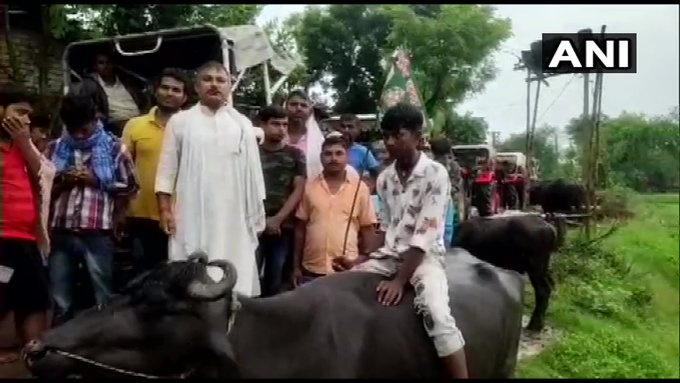 According to the Centre, these Bills will help small and marginal farms by allowing them to sell produce outside mandis and sign agreements with agri-business firms and doing away with stock-holding limits on key commodities.
The Farmers' Produce Trade and Commerce (Promotion and Facilitation) Bill, 2020 and the Farmers (Empowerment and Protection) Agreement of Price Assurance and Farm Services Bill, 2020 were passed by Parliament on Sunday. (ANI)