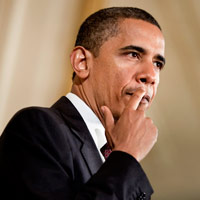 08 November, 2014
Print this article Font size -16+
A delay in potential US military action in Syria and improving economic data from China and Europe boosted appetite for riskier assets on 2 September' 2013, lifting world shares and sending the yen lower.
Oil prices also fell after US President Barack Obama announced at the weekend that any military action against Syria in response to last month's chemical weapons attack would wait until lawmakers had had a chance to vote on the plan.
The delay pushed down oil by more than $1 a barrel, and gold by more than 1 per cent, while the dollar rose to a one-month high against the safe-haven yen.
"Any risk of strikes from some Western countries on Syria have decreased at least near-term," Patrick Jacq, European rate strategist at BNP Paribas said. "The risk premium linked to geopolitical events has decreased, so risk appetite probably is resuming somewhat."
Global Economy Shines
With an imminent attack on Syria off the table for now, investors focused on the latest economic data, which showed China's factories posting their best performance for more than a year in August, easing fears of a sharp slowdown.
Euro zone factory activity rose at its fastest pace in over two years during August though the gains were still only modest and unemployment remained stubbornly high.
There was encouraging news from struggling euro zone member Spain, however, where manufacturing grew in August for the first time since April 2011.
Elsewhere, India notably bucked the trend with a Purchasing Manager's Index (PMI) showing manufacturing activity in Asia's third-largest economy shrank in August for the first time in over four years, adding to the country's economic malaise.
"Just about the whole world seem seems to be surprising on the upside on PMIs except India," Mike Ingram, market commentator at BGC Partners, said.
Shares Recover
MSCI's world equity index was up 0.5 per cent after the data, ending a run of four consecutive weekly losses made as investors positioned for the US Federal Reserve to begin reducing monetary stimulus, perhaps at its meeting later this month.
Earlier MSCI's broad index of Asia-Pacific shares outside Japan advanced 1 per cent, hitting a two-week high and adding to a 2.1 per cent gain over the previous two sessions. Tokyo's Nikkei rose 1.4 per cent.
European shares reflected the brighter economic outlook. gaining 1.5 per cent in early trading, with Britain's FTSE 100 up as much as 1.3 per cent and Germany's DAX up 1.6 per cent at one point.
A holiday in the US and a week of major central bank meetings capped by the all-important US payrolls report was likely to keep activity in check though.
Among the major currencies, the easing in Syrian tension reduced demand for the Japanese yen which is often sought for its safety in a time of crisis. This saw the dollar gain 1.2 per cent to 99.38 yen, its highest level in a month.
The brighter economic news from China lifted the Australian dollar, which is seen as a proxy for Chinese growth because of the two countries' close trade ties. It rose 0.8 per cent to $0.8970.
But the Indian rupee edged down 0.3 per cent to 65.90 to the dollar after two days of gains, and was not far from a record low of 68.80 per dollar hit last week. Indonesia's rupiah , which has also been under pressure lately, was down 0.2 per cent after the country logged a wider-than-expected trade deficit.
Buoyed by the factory activity data from top-consumer China, copper prices rose 2.2 per cent and were on track to end a four-day losing run.
Oil and gold prices fell as investors unwound their positions because the US has postponed a military strike against the Syrian government.
Brent crude prices dropped 0.5 per cent to below $113.50 a barrel, on track for a third day of declines. It had touch a six-month peak of $117.34 last week on concerns that US military intervention could lead to retaliation and disrupt crude supply in the Middle East region, which pumps a third of the world's oil.
Safe-haven gold dipped 0.25 per cent to around $1,392 an ounce after falling as low as $1,379.44, a one-week trough, earlier in the session.