Facing A Lull After The Storm 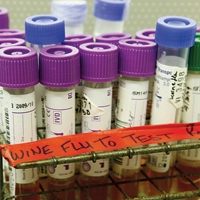 Private diagnostic laboratories hoping to cash in on the swine flu opportunity must be disappointed now. Since the labs got a green light from several state governments in August, few patients have been queuing up at their door to get themselves tested for the H1N1 virus.

Government hospital samples have also been few. "Initially, government labs sent us samples to clear the backlog. But after that, we haven't received anything," says Sanjeev K. Chaudhry, CEO of Super Religare Laboratories (SRL).

SRL, which offers this test in all its centres in India, sees no more than 100 to 200 suspected H1N1 patients daily, says Chaudhry. In August, he told BW that SRL was prepared to run as many as 1,000 tests per day. Similarly, Dr Lal Pathlabs is testing just about 40 to 50 suspected swine flu patients per day, says Arvind Lal, chairman and managing director. For now, Dr Lal Pathlabs only offers the test in Delhi and Rajasthan, although it hopes to receive approvals from other states shortly.

Meanwhile, the virus continues to spread. As on 29 October, 13,722 people were found positive and 463 patients lost their lives.