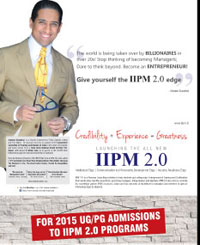 22 May, 2015
Print this article Font size -16+
Delhi Police has registered an FIR against founder of Indian Institute of Planning and Management (IIPM) Arindam Chaudhuri based on a complaint by the University Grant Commission (UGC), which he has questioned while denying any wrong doing.
In its complaint the UGC has said the IIPM was "misleading", "cheating" and "fooling" its students as it was not recognised by any regulatory body, police said.
"We have registered an FIR under Section 420 of IPC against IIPM Dean Arindam Choudhari and his father Malayendra Kisor Chaudhuri, who is a Director, based on the UGC complaint. We are probing the matter," Joint CP (Crime) Ravindra Yadav said.
A notice has been sent to both of them to join the investigation, police said.
The UGC, in its complaint, has said that despite the fact its courses are not authorised, the institute is "fooling" the students by charging a hefty fee from them.
IIPM, however, has refuted all such allegations, saying that the institute was not cheating its students.
"It's sad on a day when we launch a new program promoting entrepreneurship, the need of the hour, on the lines of our Prime Minister's 'Make in India' dream, some sections of the media have decided to pick up a case that is 6 months old.
Having said, that it's nothing new," IIPM dean Arindam Choudhari said in a statement.
"UGC and AICTE keep themselves in news by targeting IIPM with their lies because we have stayed consciously out of their purview and accused them of massive corruption", he said.
"We have never claimed that the institute is recognised by any statutory body nor have we claimed we give degrees. We give certificates and write clearly everywhere that "students interested in de jure recognition of IIPM's programmes need not apply to IIPM! Its written clearly since 1970s in our prospectus and in our websites since it came into effect," the IIPM dean also said.
"I don't realise how can this amount to cheating. We have faced this problem earlier also and have come out clean. This time as well, we will fight this. We have been cooperating with the police ever since the first notice came and will continue to do so as law abiding citizens," he added.