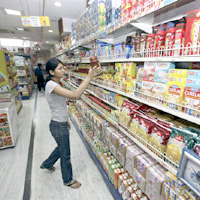 The victory gives Singh a much-needed boost at a time when he is trying to drive a second wave of economic reforms through a fractious parliament. The debate over retail reform has proved a costly distraction for the government and has already eaten up two weeks of the month-long parliamentary session.

The vote now clears the way for voting on bills aimed at attracting foreign investment to the ailing pension and insurance industries, two measures seen by financial markets as important steps towards further liberalising an economy in the midst of a slowdown.

Earlier, the animated debate on FDI in Rajya Sabha saw clashes between government and the opposition, which accused commerce minister Anand Sharma of misleading the House and demanded an apology.

The uproar led to abrupt adjournment of the House for over an hour while the minister was speaking on the motion moved against bringing FDI in retail sector.

Trouble started when Sharma read out excerpts of a Planning Commission report citing recommendations of a Committee headed by N K Singh during the NDA regime in 2002, suggesting up to 100 per cent FDI in retail be brought in as it will benefit both consumers and farmers.

Singh, now a JD-U member, rose to counter Sharma's contention, who refused to yield to him. As the Chair did not allow the JD-U member to speak, the entire opposition, including members from Left, TMC and NDA, were on their feet demanding that they wanted to hear Singh's version.

Targetting the commerce minister, leader of the Opposition Arun Jaitley said, "The minister has said that N K Singh in his capacity as chairman of the committee has supported FDI in multi-brand retail. He cannot play up one paragraph. You are reading the preamble and not the conclusion...please allow him (Singh) to speak."

The entire opposition also supported Singh who said what the Minister read out was not the conclusion of the report and that Sharma had misled the House for which the government should apologise.

As the din continued despite his repeated persuasion, Deputy Chairman P J Kurien adjourned the House till 2:30 PM.

Replying to the debate, Sharma earlier rejected the opposition contention that FDI in multi-brand retail will render small traders unemployed and damage the interests of farmers.

Sharma claimed that 11 states and major farmer and trader organisations had favoured allowing FDI in retail and claimed he had held discussions with various states before taking the decision to allow FDI.

He claimed that discussions were also held between BJP President Nitin Gadkari and Finance Minister over lunch before taking the decision and rubbished the opposition charge that no consultation with stakeholders was held on FDI in retail.

When Jaitley interrupted him saying that he has not written to any Chief Minister or political party after the government's December 7, 2011, assurance in Parliament, Sharma said, "I can say I may be less knowledgeable, but I am not ill informed."

Countering the opposition charge of exaggerating the figures in support of FDI in retail sector, Sharma claimed that around 35 per cent of fruits and vegetables in the country amounting to Rs 50,000 crore were wasted every year.

This was vociferously countered by the opposition, claiming that Agriculture Minister Sharad Pawar had given a different figure and Sharma was misleading the House.

Jaitley sought to know which figure of the government was correct. When Sharma refused to yield, Jaitley said, "You yield to the truth, not to me. It is in your minister's reply."

This led to uproarious scenes with opposition seeking an answer as to which figure was correct. "After all, there can only be one correct figure," said Jaitley, while Ravi Shankar Prasad (BJP) said, "Give answer to the House. Sharad Pawar is right or wrong."


(With inputs from agencies)