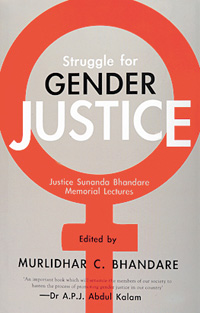 Consider these facts: by 1987, women had voting rights in 115 countries, but they formed only 10.5 per cent of legislators and 6.1 per cent of ministry-level decision makers globally. Again, for all the talk of glass ceiling being smashed by women professionals, in 1993, only 1 per cent of CEOs in the largest US firms were women. Such figures paint hazy portrait of today's women. Struggle For Gender Justice (Penguin) stands out in this context. The book includes lectures that eminent thinker delivered in memory of Justice Sunanda Bhandare, a champion of women's rights. It shows the ways in which women empowerment can be achieved more effectively and holistically.

In the essay, ‘Nature and Consequence of Gender Inequality', Amartya Sen notes "gender inequality can appear in many different forms — it has many faces." Aruna Roy recalls when a feminist asked people in a certain area to set up toilets, women there were hesitant as it meant carrying more water and, hence, added to their burden. This reaffirms what Sen means by broadening the focus of empowerment.

From ‘Ethics and the Challenge of Climate Change' by R.K. Pachauri to ‘Women's Technological Empowerment and Building a Food-and-Water Secure India' by M.S. Swaminathan, each piece elucidates several between-the-line scenarios. And Sonia Gandhi's piece, ‘A New Deal for India's Children', extends the scope of gender justice to children at large.