Exports Speed Up In May, Trade Talks Planned With US 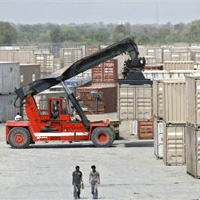 08 November, 2014
Print this article Font size -16+
India's exports increased at the fastest pace in six months in May, in a boost for Prime Minister Narendra Modi's new government as it signalled a loosening of gold import rules and a push to improve trade ties with the United States.

Bilateral trade stands at about $100 billion annually but is below potential due to disputes over protectionism and intellectual property rights that have worsened in the past two years.

Trade secretary Rajeev Kher said the two countries were planning to start trade talks in July and could hold a ministerial level engagement in October - after an expected summit between Modi and President Barack Obama in Washington.

India's exports have risen in recent months due to a pick-up in demand from Europe and the United States and a weaker rupee currency, while strict controls on gold imports have helped prevent a brewing balance of payments crisis last year.

The trade deficit stood at $11.23 billion in May, up from $10.09 billion in April, data released by the Ministry of Commerce and Industry showed.

While trade gap grew compared with April, the year-on-year trend was more encouraging. Exports in May jumped 12.4 per cent from a year earlier to $28 billion, while imports were down 11.41 per cent to $11.23 billion helped by a 72 per cent drop in overseas gold purchases.

India is the world's second-biggest gold buyer and the government is under pressure from the industry to loosen restrictions, including a 10 per cent import duty on the metal.

Kher said the trade ministry was in favour of "rationalising" the import duty and that there was a clear view that "normalcy" needed to be restored to gold imports.

"Export figures have begun to acquire their normal levels, which is encouraging," he told reporters.

Kher said he also favoured opening up agricultural exports, where possible, but added the government was ready to intervene if needed to contain onion and milk prices, key drivers of India's volatile food inflation.

Although month-on-month increases in the import bill, particularly for oil, has kept the trade deficit high for three months in a row, analysts said the trade gap should be manageable, even with softer restrictions on gold.

"With better economic activity especially in the U.S. and Europe, Indian exports are likely to stay on a reasonably better footing this time," said Anubhuti Sahay, an economist with Standard Chartered Bank in Mumbai.

"Unless global growth disappoints, risks to the trade deficit remain contained even if gold import restrictions are relaxed further," he said.