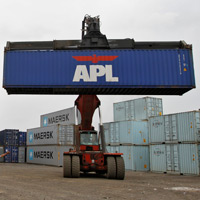 08 November, 2014
Print this article Font size -16+
A continuing recovery in the last three months notwithstanding, India's full-year exports fell for the first time in three years with a dip of 1.8 per cent to $300.6 billion in 2012-13, taking the country's trade deficit to a record high level of $191 billion.

The dismal performance for the full financial year came despite exports rising by 6.97 per cent in the month of March, marking the third straight month of uptrend. The full-year exports had fallen last time in financial year 2009-10 (about 3.5 per cent) but there has been recovery during the two subsequent years.

While a recovery in global markets was reflected in exports growth in March and two previous months, a downtrend during most part of the previous three quarters resulted in an overall dip in the full-year numbers.

Commerce and Industry Minister Anand Sharma said the sops announced as part of the Foreign Trade Policy, including those for SEZs, should help expand exports this fiscal and help bridge the trade gap.

Commerce Secretary S.R. Rao said exports are gradually picking up and should increase by 10 per cent this fiscal. On trade deficit, Rao said it has come down slightly. "Given a very weak performance for major part of the year, I think in the last 3-4 months, we really covered a good deal..."