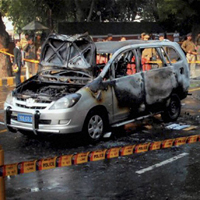 An indication that the incident in Delhi could be a part of targeted attacks on Israeli staff came when a Foreign Ministry spokesman said in Jerusalem that there have been incidents in which embassy staff were targetted in Tbilisi and New Delhi.

The incident came a day after the fourth anniversary of the killing of Hezbollah's deputy leader Imad Mughniyah.

Delhi Police spokesperson Rajan Bhagat said two Israeli embassy employees were injured in the incident. "We have rushed bomb disposal squad to the spot. We are investigating the cause of fire," he said.

An eyewitness Ravir Singh, who is the owner of a nearby petrol pump, said he heard a loud noise following which he rushed to the spot.

"I was at my petrol pump. I heard a loud noise. I rushed to the spot and found a car in blaze. A fire tender from nearby airforce station was at the spot dousing the flame," Singh said.

Police said the four cars were damaged in the incident.

There were conflicting versions of the incident with initial reports suggesting that the CNG cylinder kept at the back of the embassy's vehicle burst soon after it was re-filled at a nearby petrol station.

Fire brigade officials said the car caught fire and some reports also said there was a collision with another car.

According to eyewitnesses, the car had filled CNG at a petrol station and was on its way to the Embassy when the blast took place.

The injured Israeli embassy attache was identified as Ms Tal (42).

He said,"we are in close touch with the local authorities to assess the situation".

Asked if there was a connection between the today's explosion and the Georgia incident, the spokesperson said, "we don't have any information so far. We don't know".

A post blast team of the National Security Guard (NSG) was called in from Manesar to probe the incident.