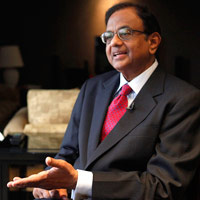 08 November, 2014
Print this article Font size -16+
Seeking to dispel fears over the state of economy, Finance Minister P Chidambaram said on 15 March the country will return to high growth of 7 per cent in two years and promised adequate public spending to stimulate it. Replying to a debate on the Budget 2013-14 in the Lok Sabha, he said the government was committed to ensuring reduction of fiscal deficit from 5.2 per cent to 3 per cent by 2016-17 as the current level is "very high" and not sustainable.

Rejecting the Opposition's charge that the government had not handled the economy well, Chidambaram said that 5 per cent growth is not bad considering the global situation when whole Europe is in recession and even US has recorded a growth of only 2.3 per cent.

The economic growth, according to the Central Statistical Organisation (CSO), is estimated to slip to decade's low of 5 per cent in 2012-13, down from 6.2 per cent in the previous fiscal.

Defending the government's decision to squeeze Plan expenditure in 2012-13, Chidambaram said it was aimed at reducing fiscal deficit as the consequences could have been disastrous.

"The only place we could economise was in plan expenditure. ...It was not a happy decision (but) we were forced to take, otherwise fiscal deficit would not have come down," he said, adding higher deficit could have resulted in "serious consequences...which are grave for India.

"It would have spelt clear disaster for India and its economy. We took correct decision to contain fiscal deficit to 5.2 per cent," he said.

For the next fiscal (2013-14), Chidambaram said that he had provided Rs 16.65 lakh crore which is enough to stimulate growth. "That is adequate expenditure to stimulate growth. No ministry or department has been given less than what they were given in the beginning of 2012-13," he said.

The Ministries, Chidambaram said, had been asked to take steps to start spending as early as April-May with a view to stimulating growth.

Attributing inflation to three stimulus packages and high fiscal deficit, he said it was an inevitable consequence of what happened around the globe in the aftermath of the 2008 financial meltdown.

Observing that there was no harsh criticism of the budget by the Opposition, Chidambaram said "they were willing to strike but afraid to wound" as they were also aware of the difficult economic situation.

The focus of the budget, he said, was on youth, women and poor, which cut across religion, caste and community. "These are three faces, which must be before us" while formulating programmes, he said.

The UPA government, he said, has been laying special emphasis on sectors like irrigation, agriculture and rural development through schemes like PM Gramin Sadak Yojna and JNNURM.

With regard to the "game changer" Direct Benefit Transfer (DBT) programme, Chidambaram admitted that there are some "teething problems" in implementing the scheme and expressed confidence that these would be sorted out as India has both software and hardware resources.

"DBT is not a political issue... It is the best way to transfer money directly to poor without corruption or leakage," he said.

Every year, he said, the government gives out subsidies worth over Rs 2 lakh crore.

Chidambaram assured members that the Food Security Bill would be introduced in the Parliament. "Food Security Bill is a promise... As Finance Minister, I promise money will be made available (for it)," he said.

Regarding revenue projection, Chidambaram said the numbers are realistic and revenues will grow 19 per cent in 2013-14 and will achieve the target by end of next fiscal.

"When GDP is growing at six per cent, why should I not assume that revenue will grow at 18 per cent... and with 10 per cent surcharge (on rich people) we are hoping another one per cent revenue growth. So, (revenues) will grow by 19 per cent," he noted.

Meanwhile, Chidambaram asserted that national women bank would be reality by October this year.

The Minister also assured the House that the shortcomings in implementation of Prime Minister's 15-point programme for minorities would be addressed.