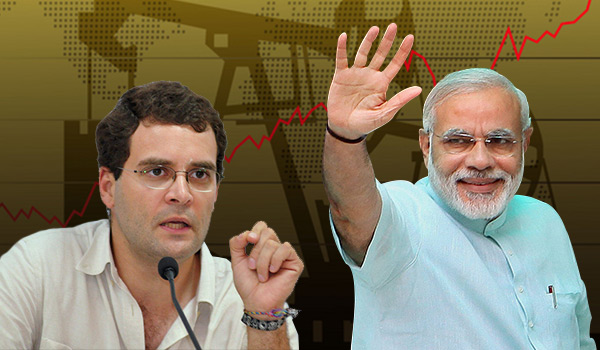 08 November, 2014
Print this article Font size -16+
The BJP-led NDA is projected to form the government at the Centre with exit polls tonight giving between 249 and 290 seats to the Narendra Modi-led grouping, which is close to the half-way mark in the 543-member Lok Sabha.

The ruling Congress-led UPA was tipped to get between 101 and 148 seats while 'others', including regional parties and Left, were projected to get between 146 and 156 seats, according to the polls shown on TV channels at the end of the ninth and last phase of Lok Sabha polls today.

One of the polls, conducted by Today's Chanakya for News24 channel, even projected 340 seats for NDA, 70 for UPA and 133 for others.

The poll on Times Now, conducted by ORG, predicted that NDA would get 249 seats while UPA would bag 148 seats and 'others' 146 seats.

ABP News-Nielson poll projected a clear majority for NDA with 281 seats while UPA was projected to get 97. 'Others' were projected to bag 165 seats.

Congress appears to be getting some good news from the South, particularly Kerala, Karnataka and Telangana.

In Tamil Nadu, AIADMK is projected to do well, with one survey giving it even up to 31 out 39 seats.

The ruling Trinamool Congress is also said to be doing well in West Bengal with projections saying that it could get upto 31 out of 42 seats.

Various polls said BJP is putting up an impressive performance in battle state of Uttar Pradesh where the party has been projected to get over 50 of the 80 seats.

ORG gave BJP 52 seats in UP and 10 to Congress. Today's Chanakya gave 70 seats to BJP, while CSDS predicted 45-53 seats for it and C-Voter gave 54 seats in the biggest state.

In the other crucial state of Bihar too, the BJP is projected to do well with one channel giving as high as 28 out of 40 seats.

In Delhi where seven states are at stake, an almost clean sweep was predicted by all the polls for BJP. Some surveys have given one or two seats for Aam Aadmi Party.

Maharashtra, which has 48 seats, is projected to give over 30 seats to BJP and Shiv Sena.

BJP was predicted to sweep party-ruled states of Madhya Pradesh, Chhattisgarh and Rajasthan.

In Madhya Pradesh and Chhattisgarh, BJP was projected to give more than 35 seats to ruling BJP out of 40 in the two states. Rajasthan was projected to give almost all the 25 seats.
Tags assigned to this article:
politics top 1 narendra modi upa rahul gandhi nda 2014 elections election 2014