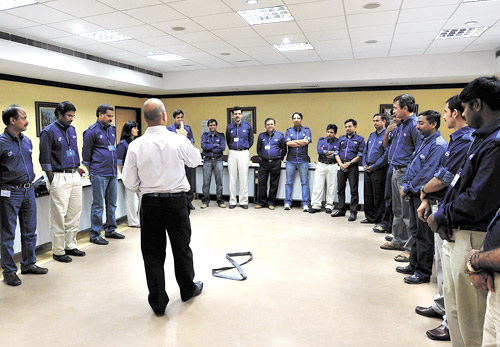 Across India, private and state-run companies are knocking on the doors of business schools to create special management development programmes (MDPs) for employees to foster leadership, marketing and business negotiation skills. For instance, Mumbai's Tata Chemicals spends Rs 7 crore every year towards training — about 20 per cent of such programmes are aimed at its middle and senior management. "People are nominated to attend managerial and leadership programmes if they are in the succession pipeline," says B. Sudhakar, chief human resources officer at Tata Chemicals. Philips India now trains about 1,000 of its 3,600 employees every year. Its training budget has increased significantly over the years. "A lot of new concepts come in, and a consumer care company needs to be updated about new markets, changing consumer behaviour and demands to have better strategies," says Yashwant Mahadik, vice-president of HR at Philips India.

The trend is catching up, and has given the executive education market a fillip. The Indian Institute of Management (IIM) Bangalore saw 40 per cent growth for such programmes during the past fiscal. It expects the trend line to hold. "The biggest challenge for Indian corporates is the scarcity of quality talent at the senior management level and not at the bottom," says Chaitanya Kalipatnapu, director of Eruditus Education, an executive education firm based in Mumbai. The market, an underinvested one, is estimated to be at Rs 500 crore today, and experts say it will grow at an annual rate of 15-20 per cent.

The Honing  Business
So, what is executive education all about? Simply put, these are courses in business schools. They vary from long-duration MBA programmes of 1-2 years to short-term programmes that can stretch anywhere from three days to a fortnight. The short-term programmes, or MDPS, and are current hot favourites for their short span, sharp objective and flexible nature.

There are principally two kinds of MDPs — open and customised. Open MDPs are the ones where a business school creates a general management programme and invites applications from individuals across sectors. These are residential programmes with a preset agenda and a module designed by the institute. They are conducted on a B-school campus.

On the other hand, customised programmes are organised for a particular company's executives on subjects the company wants them to gain expertise in. Even though executive MBA programmes have been around for more than a decade, MDPs are significantly different. Some advanced management programmes usually offer a stint outside India, too. "We conduct more number of customised programmes as compared to open-enrolment courses," says Deepak Chandra, deputy dean at Indian School of Business (ISB), Hyderabad.

Each year, ISB conducts more than 125 MDPs. Each batch includes 25-30 or 60-65 (in open enrolment) executives. "This is a dynamic environment. Organisations need to change and need to build capability within. Non-degree programmes are a good way to do that in a short span," says Chandra. MDI offers 110 such programmes a year, with their duration stretching from 2 days to 6 months. In a year, the school trains about 3,000 executives. These courses are usually certificate programmes and are known for the learning they impart rather than a valuable degree.

break-page-break
The scenario also reflects the quality of higher education in the country. "Let us face it. Supplies from premier institutes are limited," says Shalini Sarin, vice-president of HR at Schneider Electric. "We get all kinds of graduates. Many are not in a position to keep pace with the company. As they move up the ladder, we provide them with crash courses." Schneider's training budget has risen to 3 per cent of its turnover (of Rs 4,500 crore in 2010) from 1 per cent of its turnover three years ago. The bulk of the budget goes into training its senior and middle cadre.

"As companies are confronted by the rapid globalisation of markets, building strength based on core competencies, adaptability and speed in decision-making have become the key resources for competitive advantage," notes Shovan Chaudhuri, head of consultancy and management development programme at IIM-Calcutta. Executives got to have a sense of global markets not only for expansion, but to also learn from the big failures in recent times. Indian banks have taken a step in this direction.

Last month, Delhi's International Management Institute (IMI) held a three-week-long advanced management programme for the senior staff of the Reserve Bank of India and other banks. The bankers were later flown to Germany, Spain and France to learn how these countries have responded to the economic crisis in Greece. "The German economy is the strongest in Europe, while Spain is in turmoil, and France is very similar to the Indian economy," says Pritam Singh, director general at IMI, explaining the rationale behind the overseas sojourn. The programme, however, did not come cheap — it cost about Rs 4 lakh per head. But it was worth every paisa given the fiercely competitive environment.

According to Ravi Shanker, chairperson of MDP at the capital's Indian Institute of Foreign Trade (IIFT), the need to understand the global business environment has been high on the agenda for companies. And, hence, IIFT's courses are much in demand.

At times, it is not the world that needs to be grasped — just the workplace. For instance, Cairn India paid Rs 22.5 lakh to MDI to train 50 employees in the basics of finance and effective communication, in a five-day residential programme. Programme director Bajaj says: "They keep reading about the Cairn-Vedanta deal, but non-finance managers needed to understand financial details and how this will affect cost management going forward."

The government, too, is an enthusiastic participant. The Income Tax department has tied up with Duke University in the UK for a specialised course in tax administration for its deputy commissioners and joint commissioners. The Railways, too, has tie-ups with top B-schools for MDPs, and is among the biggest clients for the global business school INSEAD. The institute has seen an overwhelming response to its pilot programme for very senior executives with work experience of 15–16 years. Its course stretches over a year, and the fees are steep at Rs 16.5 lakh plus travel expenses.

"Such courses are here to stay. The Indian manager is opening up to training and development, and companies warm up to the need to refresh the knowledge and skills of senior executives. It is also a retention and motivation tool," says Rekha Sethi, director general at the Delhi-based All India Management Association (AIMA). Their MDPs have been oversubscribed progressively in the past few years.

Praveen Bhadada, a senior consultant at Zinnov Management Consulting, says the bulk of the training budgets are restricted to skill development of recruits or middle management executives. "Companies in India — both multinationals and locals — are underinvested towards executive training," says Bhadada.

break-page-break
But the movement is also going up to a new level. Topics range from getting a hold on a rival's expense management to interacting with board members. ISB and MDI work with companies to measure if investments made by them are in sync with needs, and their impact. It is almost audit-like to an extent. For instance, healthcare major Max India had a short-term programme designed for its senior management on ‘how to manage the board'. "Governance is important, and communication between board members and senior executives has to be meaningful," says P. Dwarkanath, director–group, human capital at Max India. "The course focused on how to make the board more effective and add value to the organisation by getting the best out of independent directors."

It Pays To Teach, Too
The executive education market is coming of age. India's top B-schools are non-profit entities. But MDPs are a good source of revenue. Earnings are earmarked for research and development. While IIMs do not disclose earnings details, other B-schools do not deny that margins in MDPs  are higher compared to regular two-year MBA courses. In a regular MBA, the institute ploughs back the money in infrastructure development, placement activities and examinations, while it saves on these costs in a short-term programme.

"Executive education is a big revenue generator for MDI. It is a 50:50 mix between regular MBA and short-term courses," says S. Chatterjee, dean of continuing education at MDI Gurgaon. "The profits are more in executive education." It is also a good platform for the faculty to interact with the industry.

The executive education market is well-established in geographies such as the UK, Germany, Japan and Singapore, and the trend has gradually kicked off in the Indian market as well. "The pie has increased significantly from what it was five years ago to what it is today," says Chatterjee. This has created a battle zone for institutes vying for fat clients.

While top B-schools are cashing in on their brand image, small institutes such as IILM Institute for higher education in Delhi are still seeking success in this business. After two failed attempts at long duration executive programmes, the institute has shifted focus to short-duration MDPs and is expecting a positive response this time.

Foreign universities also eye the Indian market for executive education. "We have always been interested in India. Language has not been a barrier for us; the difficulty all along has been in finding a model that is affordable to the Indian market," points out Martin Gargiulo, INSEAD's associate dean of executive education in Asia. The rates that INSEAD or Harvard Business School charges in established markets will not work out in India.

Yet, one cannot compromise on the quality. The going rate for a course with an international faculty varies from Rs 50,000 to Rs 1 lakh per day. It can go as high as Rs 7-8 lakh for a day-long dose of wisdom. "In India, executive education is still perceived as more of education rather than development. That needs to change with time," adds Gargiulo. Says Stefan H. Thomke, chair of executive education in India at Harvard Business School. "These international programmes bring exceptional people from different industries and background together and helps develop professional relationships that last beyond a programme."

They also serve a dual purpose. It is a reward, and for employees who have been performing, it is also a strategic retention tool. As a regional manager at a leading IT company puts it, such courses are just a token of appreciation by the firm to its best performing employees. "There is hardly any learning opportunity in such a short span," he says. Yet, you cannot deny that going back to school can be a whole lot of fun.

There is more to it, feels Alex Manappurathu, chief programmes officer (executive education), IIM-Bangalore. He feels such courses not only allow for networking, but also give executives time to relax and reflect on what they have been doing. "Most of the time, senior executives keep running without even looking at what they are doing. They are in firefighting mode, and such courses bring them back to the class where they can introspect and look within," says Manappurathu. Yes, the statue is not inside a rock; it is within you. Chisel yourself.